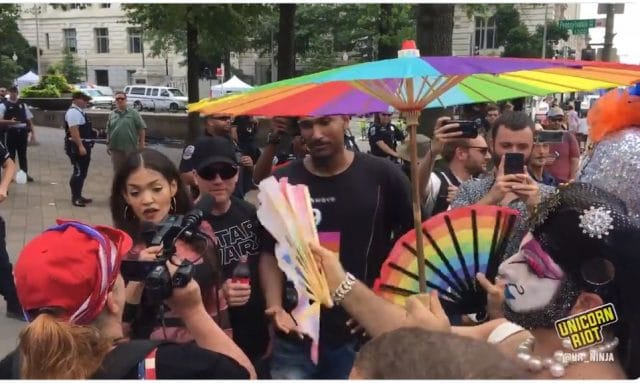 Drag queens used their hand fans to drown out an alt-right demonstration organized by the Proud Boys, an extremist group with ties to white nationalism.

The self-proclaimed “chauvinistic men’s group” attracted roughly 250 supporters to its Demand Free Speech rally in Washington, D.C. Saturday to protest what they contend is an anti-conservative bias on social media, reports USA Today.

The alt-right group was outnumbered roughly 2-1 by counter-protesters.

Video shared online shows a group of Drag Queens from the DC Chapter of Sisters of Perpetual Indulgence using “hand fans to drown out a far-right media host who had been antagonizing” counter-protesters, according to Unicorn Riot.

The poorly attended event shut down an hour earlier than scheduled after being outnumbered by anti-fascist activists, reports RawStory.