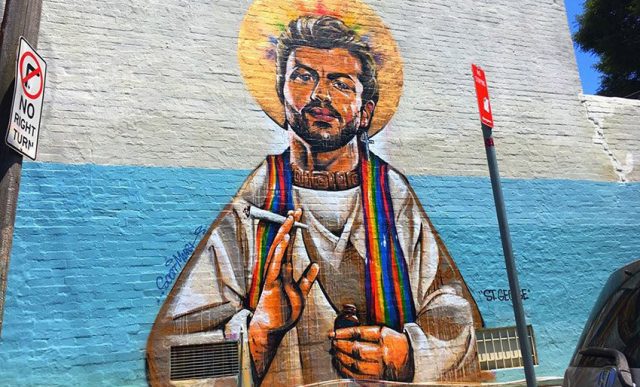 The mural, located in Newtown, depicts the singer as a Saint and features him with a rainbow stole, a joint in one hand and a bottle of poppers in the other.

The mural was created by Scott Marsh with the help of local production duo, Stereogamous.

The pair shared an image of the mural on their Facebook page which quickly became a hit.

Alongside the image was the caption, “We got together with local painting magician Scott Marsh to honour our dear friend. Presenting ‘Saint George, Patron Saint of Parks at night’ Remembering this lover and activist watching over us all.”

The duo then shared images of the creation of the mural on their Twitter page.

Jonny Seymour and Paul Mac, the men behind Stereogamous, spoke to Gay Star News and explained why they created the mural.

“George’s passing has been a devastating blow to our community. He means so much to so many in our queer family. He was also a good friend, brother and musical collaborator of ours too.”

“We needed to have a physical tribute where LGBT people (and our admirers) could gather to pay their respects without any dogma barking.”

“Scott Marsh, like George is an artist and activist. He was very enthusiastic to portray George in a loving and spiritual way.”

They add, “The concept of Saint George is very appropriate. He is a gayngel, after all.”