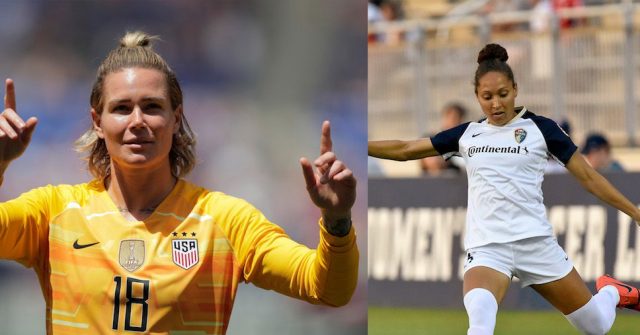 Harris blasted Hinkle on Twitter Monday for claiming in an interview last year that the team was “not a welcoming place for Christians.”

Hinkle, our team is about inclusion. Your religion was never the problem. The problem is your intolerance and you are homophobic. You don’t belong in a sport that aims to unite and bring people together. You would never fit into our pack or what this team stands for. https://t.co/XmzKIB88UV

She was responding to a tweet by noted Catholic anti-abortion and anti-gay advocate Obianuju Ekeocha of Nigeria, who dusted off Hinkle’s June 2018 interview with CBN to again accuse U.S. Soccer of leaving her off the squad because of her Christian faith.

Jaelene Hinkle, is the 26-year-old American footballer who gave up the opportunity to be in the USWNT.

I was very curious to know what happened so I went in search of her interview with CBN.

Apparently, the US women’s Football team is not a very welcoming place for Christians. pic.twitter.com/iWXrG4Dkcw

Hinkle, a left back for the National Women’s Soccer League’s North Carolina Courage, left the U.S. Women’s National Team after earning a place on the team for series of international matches in June 2017. She admitted in that 2018 interview with CBN’s “The 700 Club” that she refused the spot on the grounds that the team’s special Pride Month rainbow-number jersey went against her religious beliefs.

Days after the interview, during a NWSL road match against Portland Thorns, a sizable LGBTQ fan base booed her every time she touched the ball. After that match she became a villain to some and a cause celebre to others.

On Monday, Harris — who is engaged to teammate Ali Krieger — clapped back at Ekeocha and directly refuted Hinkle’s claims in that 2018 interview.

Don’t you dare say our team is ‘not a welcoming place for Christians’. You weren’t around long enough to know what this team stood for. This is actually an insult to the Christians on our team. Same on you.

While Ekeocha and other prominent conservative voices including Erick Erickson of The Resurgent have rallied to Hinkle’s defense over the last year, fans of Harris joined her critique on Twitter Monday by citing key players such as Tobin Heath and Julie Ertz, who have been outspoken about their faith.

morgan brian, tobin heath, and julie ertz are outspoken christians but manage to do it without being bigots. if your christianity means that you can’t love everyone than what is even for

Hinkle’s history with the team since her refusal to play in 2017 largely involved a second call-up in June 2018 prior to the Tournament Of Nations. U.S. head coach Jill Ellis cut her three days into the team’s training camp. The decision was analyzed, and perhaps criticized by soccer pundits, including Outsports’ Katelyn Best.

After being booed that night in Portland, Hinkle did not speak to the media. In this controversy, she stayed true to form by making no public statement to media outlets or on social media, other than a quote on her Twitter profile: “If you live for people’s acceptance, you’ll die from their rejection.”