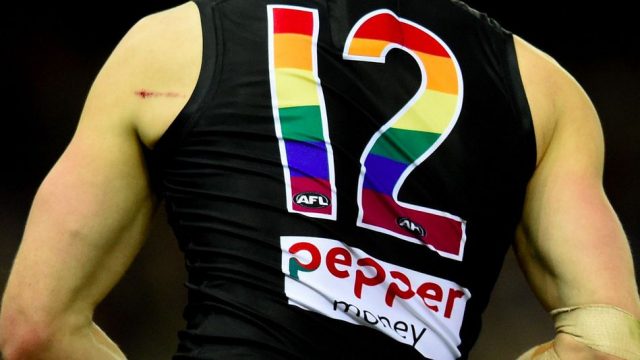 The rainbow flag took over Melbourne’s Etihad Stadium Saturday night in a powerful statement of acceptance and love.

The Australian Football League (AFL) held its first-ever Pride Game to celebrate the LGBT community during a match between St Kilda and the Sydney Swans. Although the Swans ultimately triumphed, beating the Saints with a 70-point win, the importance of the game to fans of all stripes could not be diminished.

The Pride Game initiative was spearheaded by Victorian player Jason Ball, the code’s first openly gay male player, in an effort to promote understanding in the AFL and among its fans.

“I came to understand a lot of the homophobic language and behaviour wasn’t coming from a place of hatred towards me or gay people, but rather just ignorance and not knowing the impact on me,” Ball said in a statement.

While no current top-level player is openly gay, Ball told the ABC he believed the event would be “life changing.”

“Growing up, the footy club was the one place I thought I’d never be accepted. Homophobic language was routinely used on the field and it left me scared to be myself,” he said. “Struggling in silence with my identity caused me so much heartache and pushed me to a very dark place.”

For one night at least, everyone was welcome.

Dan, Molly and Josh ready for a great night at @etihadstadiumau! #PrideGame

I never thought we'd see this moment. So much emotion in this stadium. Mostly joy and belonging #PrideGame #history? pic.twitter.com/LXwSkeE4RQ

What a night to be a part of, the first AFL #pridegame – footy is for everyone! Special thanks @glamsquadmakeup for looking after me xx @mattricho0 @cameron_ling_45 @7afl

This outside broadbast was mammoth! What a night. What a team. ? #pridegame

As a @stkildafc member I'm super proud, as a human being, doubly so. More than just a game, the #pride is immense! pic.twitter.com/xvhp7xBbyH