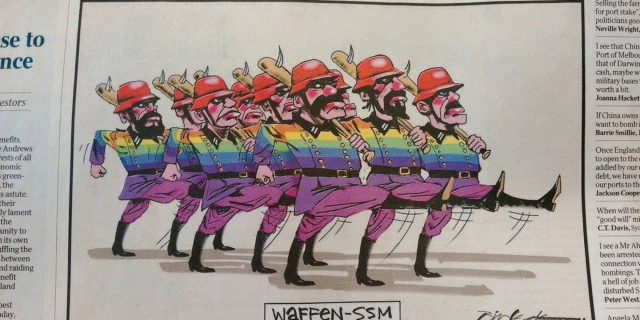 News Corp newspaper The Australian has set the stage for a public debate on equal marriage by printing a cartoon likening gay people to Nazi stormtroopers.

The cartoon is captioned ‘Waffen-SSM’, a play on words linking ‘Same-Sex Marriage’ and the Nazi Party’s military Waffen-SS wing, which was responsible for numerous war crimes. The offensive comparison has been roundly condemned by LGBT rights groups, given the Nazis persecuted thousands of gay men alongside Jews and other minority groups.

It comes amid controversy in the country over the government’s plans to hold a public vote on equal marriage.

The country’s PM Malcolm Turnbull has repeatedly blocked a free Parliamentary vote on same-sex marriage, and is instead bringing forward plans to take the issue to the public in a non-binding plebiscite, to avoid a rift with his own ultra-conservative MPs.

Earlier this month it was revealed that the Australian government will hand $7.5 million of funding to anti-LGBT activists to run a ‘No’ campaign, under the draft plebiscite bill.

The government plan would split $15 million of public funding between ‘Yes’ and ‘No’ campaigns – while the plebiscite is projected to cost as much as $160 million.

A poll this week found 68% of Australians strongly opposed to the taxpayer-funded campaigns.

The opposition Labor Party has urged the PM to avoid the cost entirely by permitting a free vote on equal marriage in Parliament.

He said: “Let me be as blunt as possible.

“A ‘no’ campaign would be an emotional torment for gay teenagers, and, if one child commits suicide over the plebiscite, then that is one too many.

“Growing up is hard for everyone, but, for young Australians who are grappling with their sexual identity, it can be so much more difficult.

“The idea of young people, perhaps yet to come out, seeing the legitimacy of their identity debated on the national stage—that is not an ordeal which we should inflict on any citizen when we have a better path.”

LGBT protesters disrupted a Australian Christian Lobby summit with anti-gay marriage activists earlier this week. The group, likely to be central to a No campaign, has already compared equal marriage to the Holocaust, while the so-called ‘Australian Marriage Forum’ claimed that equal marriage will ‘harm’ children.