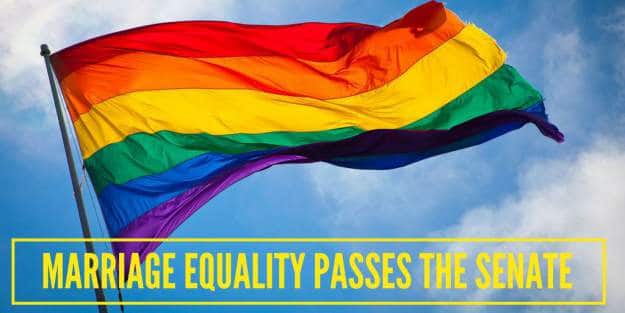 43 members of Australia’s Senate voted to pass a bill to legalize same-sex marriage. Only 12 voted against it.

Having passed this first hurdle, the bill will now go on to be voted upon by the House of Representatives, next week.

Earlier this month, 61.6% of Australians who participated in a postal vote said they were in favor of a law change that would allow for same-sex marriage.

As a result, Prime Minister Malcolm Turnbull said that the government would aim to pass legislation that would allow same-sex couples to marry before the end of the year.

“And now it is up to us here in the parliament of Australia to get on with it, to get on with the job the Australian people have tasked us to do and get this done. This year. Before Christmas. That must be our commitment.”

And it looks like that promise is right on track!

This day has been a long time coming. A day for which many in our community have struggled. A day we have hoped for. Today the Senate voted for #marriageequality pic.twitter.com/m3AEt64hZt

BREAKING: Australian Senate has passed the #MarriageEquality bill by 43 votes to 12! This is historic — and it’s because of you. We did this together!

Next week it heads to the House of Representatives. It’s time for our MPs to get this done. pic.twitter.com/5mFJlZPktw