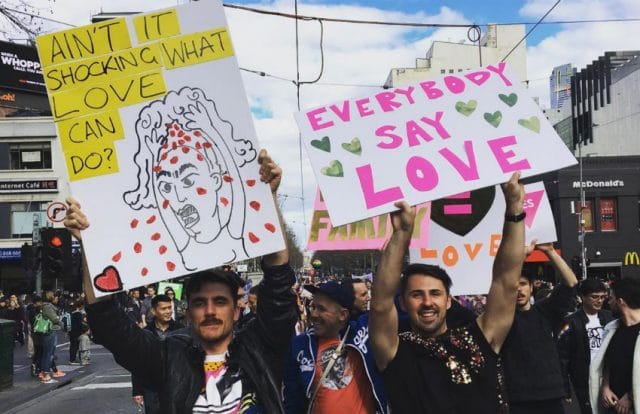 Australia could potentially have marriage equality by the end of 2017, but that all depends on the result of a national vote.

Australia is not voting in a compulsory plebiscite or referendum on marriage equality. But rather a non-binding postal survey.
The Australian Bureau of Statistics (ABS) was commissioned to hold a national poll on the issue.

From September 12 every eligible voter – about 16 million people – will receive a postal survey form in the mail. The forms must be posted back before November 7.

The results will be revealed on November 15.

Here are some key dates to be aware of. pic.twitter.com/e2nFbcAfit

What will the survey ask?

On Monday, Australians got their first-look at the survey form (a day before it was sent out).

The question is, ‘should the law be changed to allow same-sex couples to marry?’. 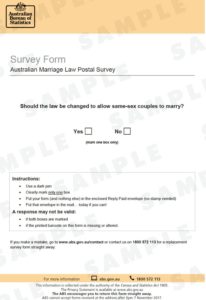 But why even have a postal survey?

Great question! Marriage equality could be legislated within minutes in Australia’s Parliament.

In fact, there has been 22 attempts since 2004 to do so.
The Liberal Party government has stood firm that marriage equality would be decided by the public. But plebiscite-enabling legislation was knocked back twice in the Senate.

PM Malcolm Turnbull found a sneaky way around this and announced the postal survey. It will cost taxpayers AU$122 million (US$98 million).

If the majority of Aussie vote yes, the matter will then be voted on in parliament.

The majority of politicians support marriage equality. And even some of those who do not said they would vote yes in parliament if that’s what Australians wanted. Including former PM, vocal same-sex marriage opponent and brother to a lesbian, Tony Abbott.

I will respect the people's vote on SSM and, if "yes", facilitate the passage of a bill. 1/3

But the legislation they would be voting on has not yet been revealed.

PM Turnbull said that would be the end of the matter during this term of government.

Labor’s Opposition Leader Bill Shorten said if he wins the next election – likely to be in 2019 – he would legislate on the issue in his first 90 days in government.