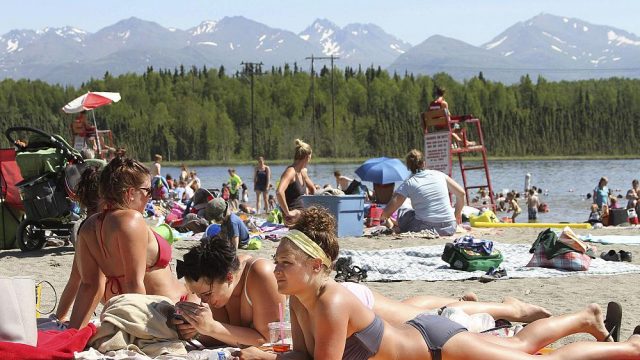 Alaska could experience record high temperatures in the coming days as a massive heat dome parks over the region, sending temperatures higher than have ever been recorded in the state.

The unusual heat wave is expected to bring temperatures of 87 degrees or higher over the next five days, stretching from July 4 through July 8.

The agency added that temperatures through Friday could match or break the all-time high temperature record set at Anchorage International Airport of 85 degrees on June 14, 1969. “The most likely days for this to occur would be Thursday or Friday,” the National Weather Service forecast said.

The current record in Alaska’s largest city could even be surpassed over several days, according to Brian Brettschneider, a climate researcher at the University of Alaska Fairbanks.

“It’s entirely possible that the warmest temperature ever recorded in Anchorage could be exceeded three to five days in a row,” Brettschneider said. “That’s the definition of unusual.”

The blast of heat is being caused by a high-pressure ridge of air that is blanketing the state.

“Air is being pushed and squeezed into one location and you end up with a mass of air that weighs more and sinks,” Brettschneider said. “That sinking motion keeps it sunny because it prevents clouds from forming, and it actually pushes warm temperatures down to the surface.”

The extreme temperatures come after a record dry June for Alaska and the warmest June on record for the state, he added. The northernmost state’s hot spell also comes on the heels of a heat wave that baked Western Europe and shattered records in France, Germany, Poland and the Czech Republic.

Like any weather event, heat waves form as a result of a complex mix of factors, but Rick Thoman, a climatologist based in Fairbanks, said climate change is likely also playing a role.

“These kind of extreme weather events become much more likely in a warming world,” Thoman said. “Climate change is not causing it, but it is contributing to it. When other pieces line up like high pressure over the state and very warm sea surface temperatures, all the pieces fit together and make these extreme, or even unprecedented, events that much more likely.”

So far, the pieces are aligning to make for uncomfortable conditions across the southern part of the state, in particular, where the center of the warm mass of air is hovering.

“Our houses are built to hold warmth in because we’re a winter state, not a summer state,” Brettschneider said. “We don’t have central air conditioning, so we rely on it cooling off at night to get relief. But we also have 19 hours of daylight right now, so imagine 19 hours of the sun just beating against the windows.”