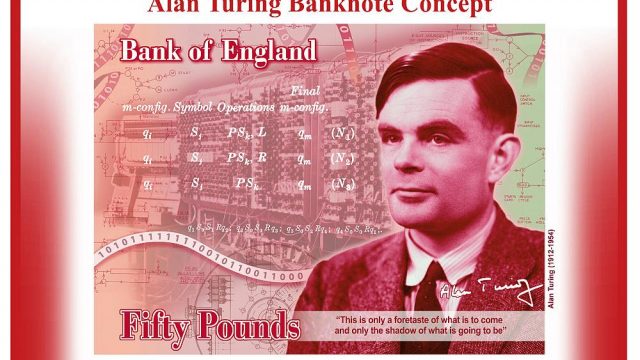 Alan Turing, the late British computer scientist famous for cracking the Nazi regime’s Enigma code during World War II, is to feature on the new £50 note, the Bank of England announced on Monday.

The polymer note, which will enter in circulation in 2021, will bear a picture of the mathematician taken in 1951 as well as technical drawings for the machine built by Turing to crack the Nazi code, known as the British Bombe.

Turing’s signature and one of his quotes given to The Times newspaper in 1949 — “This is only a foretaste of what is to come, and only the shadow of what is going to be” — will also be part of the imagery.

The Bank of England’s Governor, Mark Carney, who unveiled the design at the Science and Industry Museum in Manchester, celebrated Turing as “an outstanding mathematician whose work has had an enormous impact on how we live today.”

“As the father of computer science and artificial intelligence, as well as war hero, Alan Turing’s contributions were far-ranging and path-breaking. Turing is a giant on whose shoulders so many now stand,” he added.

Carney was the one who ultimately picked Turing after the bank received a total of 227,299 nominations during a six-week public consultation period, from which a panel extracted nearly 1,000 eligible characters which they then whittled to just 12.

Despite his code-breaking prowess during the war and his work in the development of early computers, Turing was prosecuted in 1952 for homosexual acts and died just two years later at the age of 41 in an apparent suicide.

An internet campaign calling for Turing to be pardoned was launched in 2009, which led to former Prime Minister Gordon Brown issuing an official apology in which he deplored the “utterly unfair” and “appalling” way he had been treated.

Queen Elizabeth granted him a posthumous pardon in 2013.