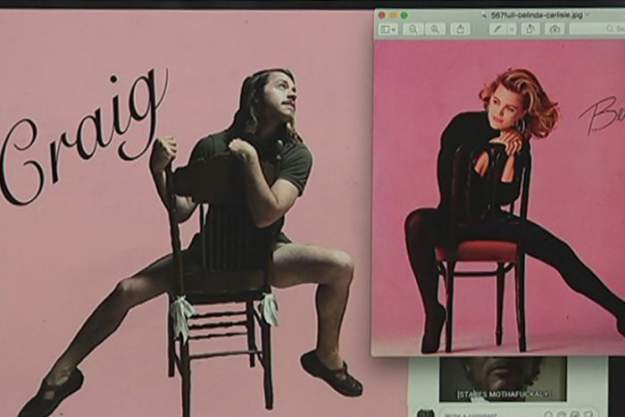 A Recreation Of A Belinda Carlisle Photo Sparked His Removal!

Sigh. I have, as always, a huge opinion regarding this topic. I went to a Catholic grammar school and girl, it was hell. I still believe that I need to send the goddamn Vatican a therapy bill after the crap those horrible teachers and kids put me through. Seriously, I am a proud fallen Catholic ever since I had been isolated by my fellow students and their parents…the whole nuns not believing in erasers cause “God doesn’t make mistakes” thing is a story for a separate day. I have goosebumps right now thinking of my tragic experience. Fortunately, for the lack of a better word, I now can laugh with many other flamboyant, homosexual men who can empathize with my past as we share similar experiences. But, this whole religious nonsense now brings me to our next story.

Craig Campbell has just been ousted in a teaching position from his Baptist school. Campbell decided to come out to his colleagues at a Baptist school after he recreated a photograph of Heaven Is A Place On Earth singer, Belinda Carlisle. Why exactly? Well, the photo made rounds after being discovered on Facebook by students who were allegedly upset with the image. Campbell isn’t solely upset about losing his job of two years, but he was even a student at this school…wow. Some religious nuts are truly soulless. Campbell is speaking publicly about his experience to raise awareness that this isn’t a Christian way to act. He tells ABC Australia:

“I hoped in some way that I could begin to change that, create a conversation so that kids wouldn’t feel so isolated, they wouldn’t feel like they were alone in this thing, which is such a struggle. I recognize there is a need for religious freedom but does it come at the expense of some of the most vulnerable in our society? Is that really the Christian way to act? I don’t think so.”

I hope Campbell gets back on his feet soon and finds steady employment with a religious school who will value him rather than toss him aside. Totally bogus.