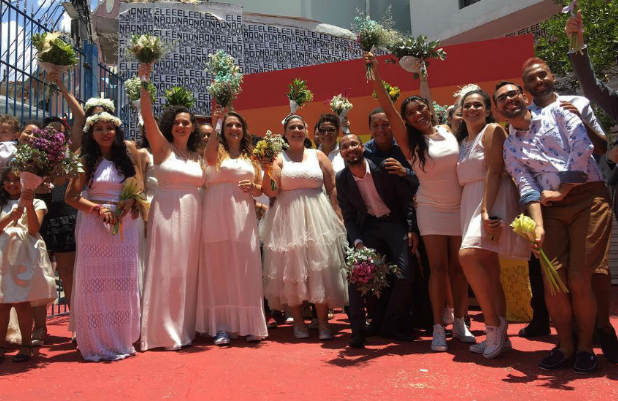 Thirty-eight couples took part in a mass wedding event on Saturday, ahead of the presidency of the far-right politician Jair Bolsonaro

Many LGBTI people in the South American country are fearful for their rights following the election of Jair Bolsonaro, to the position of President. The far-right leader of the Social Liberal Party, Bolsonaro takes office 1 January 2019.

Bolsonaro has made numerous homophobic statements, including, ‘Yes, I’m homophobic – and very proud of it’. He also once suggested that if parents see their son ‘acting a little bit gay’ they should beat him ‘to make him normal’.

Same-sex marriage legal in Brazil since 2013

Same-sex marriage has been legal in Brazil since 2013. However, some gay and bisexual people worry that once in office, Bolsonaro may roll back some of their rights.

Local LGBT advocacy group Casa1 organized Saturday’s event at its premises in São Paulo. After announcing its intention a few weeks ago, it managed to raise around $12,000 to help cover the expenses of the event.

A team of volunteers helped to create dresses, decorate the venue, style hair and prepare food. Thirty-eight couples got married at the event.

A report by BBC News profiling same-sex couples in Brazil included and interview with lesbian couple, Larissa and Luana, prior to their wedding ceremony.

Having been together for three years, the couple said they chose to marry before Bolensaro becomes president.

‘We decided to get married after the presidential elections here in Brazil,’ says Larissa. ‘The president-elect is extremely homophobic and he could take away the rights that we’ve won, such as the right to marry.

‘What he says in itself is enough to scare us. He thinks we should die. He doesn’t think we are normal.’

‘An act like this is very important, it’s beautiful, it’s a lot of love, everyone is very happy, very emotional, it’s very important an event like this, that more and more people’s visibility and acceptance increases!’ Balsi told Glamour magazine

‘Marriage was a way to ensure our rights,’ she said, explaining she was afraid the law might changed and, ‘we will not be recognized. We already have a family.’

Iran Giusti, of Casa1, said, ‘For us, to put together this collective marriage is to be able to provide a symbolic act of resistance, existence, and affection. It is to show that we are here and we will fight for our rights, regardless of what the next administration will do in the country.’