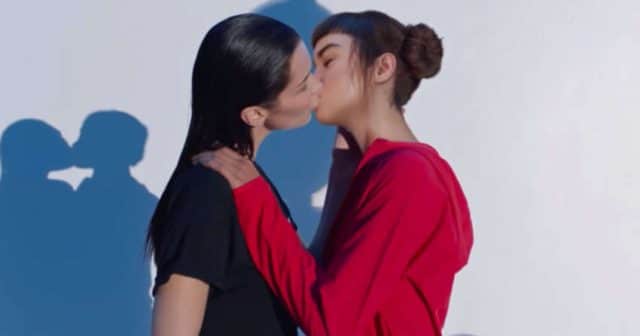 Lil Miquela began life as an Instagram profile in 2016. Her popularity exploded, leading to the virtual influencer gaining her own modeling jobs and releasing music. She now has over 1.5million followers on Instagram.

US-born Bella Hadid, 22, has garnered over 24million followers on Instagram herself. She is one of the world’s most in-demand models.

‘Life is about opening doors, creating new dreams you never knew could exist,’ says Hadid in the Calvin Klein clip, before leaning in to kiss Lil Miquela.

Hadid was formerly known to date Canadian singer TheWeeknd. She has never labelled her sexuality, but there has been speculation. Fans were quick to pounce upon lyrics to a track TheWeeknd released earlier this year in which he seemed to ruminate on a partner’s sexuality.

Hadid’s latest work for Calvin Klein will do little to end that speculation, although some on social media have lamented she’s only kissing a digital animation and not a real person.

‘I’m not sure what to make of it, it’s bizarre,’ said Lois Shearing, founder of #DoBetterBiUs & @NetworkBi.

‘In one way, it seems as if Bella Hadid is confirming the rumours of her bisexuality, which is awesome for her if she is now “living her truth”. In another it ways it feels weirdly appropriative to use that phrase because one them isn’t even living, she’s an AI.’

Celebrities like Ariana Grande don’t owe us a coming out