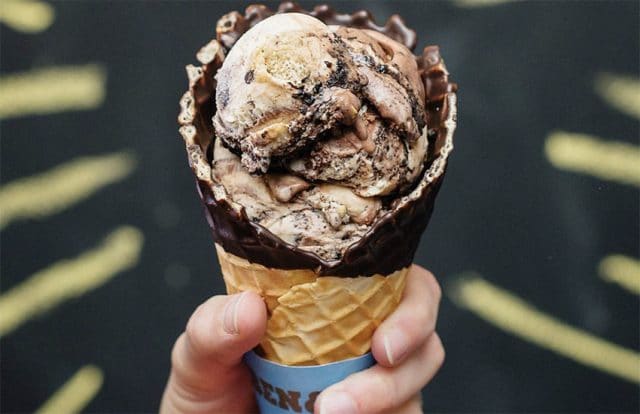 ‘This doesn’t even begin to compare to how furious you would be if you were told you were not allowed to marry the person you love,’ say Ben & Jerry’s

Ben & Jerry’s announced today that it was barring customers at is 26 stores in Australia from ordering two scoops of the same flavor.
It’s doing so to highlight the lack of marriage equality for LGBTI people in Australia.

‘Imagine heading down to your local Scoop Shop to order your favorite two scoops of Cookie Dough in a waffle cone. But you find out you are not allowed – Ben & Jerry’s has banned two scoops of the same flavor. You’d be furious!’ said the company in a statement.

‘But this doesn’t even begin to compare to how furious you would be if you were told you were not allowed to marry the person you love.

‘So we are banning two scoops of the same flavor and encouraging our fans to contact their MPs to tell them that the time has come – make same sex marriage legal! Love comes in all flavours!’

To accompany the initiative, the ice-cream giant is installing post boxes emblazoned with rainbows in each of its Australian stores.

It wants customers to write a postcard to their MP urging them to back marriage equality.

‘We will make sure that the postcards are delivered before the final parliamentary session on June 13th, before the budget is announced –We see this as the next opportunity for to achieve marriage equality, so we need to act NOW!’

‘At Ben & Jerry’s we love love, and we think most Australians do too. More Australians than ever before believe everyone should have the right to love who they love – and marry them too, if that’s what makes you happy. Let’s make it happen!’ 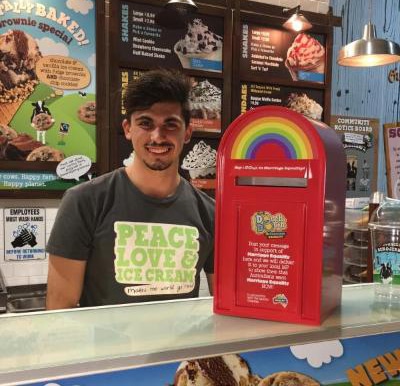 Ben & Jerry’s is known for taking a stand on social issues. This is not the first time that it has spoken in support of marriage equality.

In the UK, the company teamed up with LGBT advocacy group in 2012 to promote marriage equality – renaming one of its flavors as ‘Appily Ever After’ and featuring two figurines of grooms on the packaging.

Similarly, in Germany, the company supports the Ehe Für Alle movement: a conglomerate of over 60 organizations supporting marriage equality. To celebrate, it renamed its Cookie Dough ice-cream into ‘Yes I Dough’.

In the US it was among the many companies to sign an amicus brief to the Supreme Court in early 2015 urging it to legalize same-sex marriage across the country.

In summer 2015, when marriage equality was made legal across the US, it temporarily renamed Chocolate Chip Cookie Dough flavor as ‘I Dough, I Dough’.