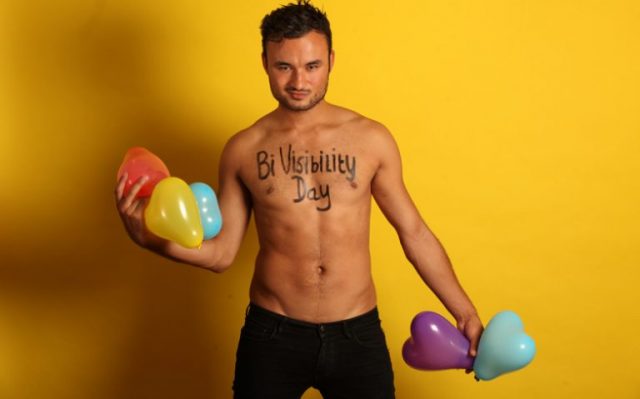 It’s Bi Visibility Day! And many people have asked me, what is that?

Well, it’s the day bisexual people get to celebrate how awesome they are, and draw attention to the issues they face. Issues like biphobes (or as I call them, penis whisperers) who think they know more about my sexual preferences than I do. People who think that at 25 years-old I’m so unobservant that I don’t know what turns me on.

I am an ordinary guy who happens to be bisexual. However, over the last six months I have probably become the most vocal bisexual man in the UK. I was blissfully happy being bisexual and anonymous until I realised as a guy teaming with confidence, loving his bisexuality and with a general lack of respect for other peoples opinions, I had a responsibility to try and make the world a better place for the other bisexuals. The bisexuals that can’t stand up for themselves, the bisexuals that have no role models, the bisexuals that so often feel let down by LGBT groups such as Stonewall and others.

Unfortunately it’s not just bisexual people that face a hard time, another reason I began talking about my bisexuality was because of the discrimination my girlfriend was receiving. She was getting comments like ‘Are you the one who’s boyfriend is gay?’ or ‘’You know your relationship is just a phase to him right?’ It was distressing to see my girlfriend becoming a victim of biphobia simply for dating me. And in the absence of there being any out and confident bisexual men in the media, I decided it was up to me to show the world how awesome being a bisexual man is and tackle the issues we face.

As I look back over the last 12 months I think some terrific progress has been made.

First came the news from YouGov which found that while only 6% of 18-24 year olds identified as gay, 43% said that they did not identify as gay or straight, indicating varying degrees of bisexuality. This officially made bisexuals the biggest subgroup of the LGBT community, with the orientation relating to more people than the other subgroups combined.

More recently a study carried out in Australia made headlines by finding that bisexual men trumped straight men when it came to finding a life partner. The School of Health and Social Development found that ‘Women in relationships with bisexual men say their partners are better lovers and fathers than straight men.’

While all of this is encouraging progress, it’s simply not enough. Even with almost half of young people identifying with the orientation, Britain has no bisexual magazines, venues or socialising apps. Meaning that for bisexuals in the UK, there are not a lot of places to turn for more information or to find others like themselves.

When a huge proportion of people’s ‘coming out’ journeys entail undermining MY sexuality I have to speak up.

There are many topics I could go in to on the issues facing bisexuals, I could write an entire book on the failings of LGBT groups. But this Bi Visibility Day I want to address the uncomfortable topic of the damage gay men have on the credibility of bisexuals.

There is a big issue with gay men using bisexuality as a stepping stone on their way out of the closet. Many gay men will spend some time telling people they are bisexual to gage peoples reaction before coming out as gay. This has brought a lot of scepticism to bisexuality, as people now think it’s a natural step on the way to becoming gay. The truth is these men were never bisexual, they were always gay they just didn’t know or possibly accept it at the time.

What many people seem to not realise is that being bisexual isn’t a phase, it is a life long sexuality. I know that I will be attracted to both genders for the rest of my life and to me that’s a privilege.

Celebrities such as Tom Daley and Ollie Locke have done some serious damage to bisexuals, they have both publicly made bisexuality look like a phase, and as a bisexual it is disheartening that no-one pulled them up on it. I would never want to criticise anyone’s coming out journey, but when a huge proportion of people’s ‘coming out’ journeys entail undermining MY sexuality I have to speak up. I think what we desperately need now is a new word to describe those years of sexual exploration or confusion because that world is NOT bisexual.

Gay people should be our biggest allies in the world but the reality is far from it. As I said at the time, Christopher Biggins comments about bisexuals recently didn’t shock me. Gay people are statistically more biphobic than straight people, I’ve experienced it first hand. The truth is the majority of my friends are gay, and it’s never nice to have uncomfortable conversations with your friends, but I want to see more gay men throwing their support behind bisexuals and cheering us on just as much as we cheer you on.

This Bi Visibility Day I’d like you to ask yourself: How would I feel if people tried to tell me what my sexuality was? How would I react if a stranger told my partner that our relationship was a phase?

Then ask yourself – am I supportive of bisexuals?

If you’ve been affected by any of the issues raised in this opinion piece, there is always someone around to listen.

If you want to talk about bisexuality, or any other topics, Switchboard LGBT+ helpline are here to listen. You can read all about them on their website, switchboard.lgbt, and you can phone them on 0300 330 0630 between 10am-11pm every day.