DETROIT (Reuters) – Democratic presidential front-runner Joe Biden and rival Kamala Harris battled fiercely over their healthcare plans in a debate on Wednesday, picking up where they left off last month when they had an explosive confrontation over race.

On the second of back-to-back nights of debates, the two rivals waded into a growing fight over healthcare that has split the Democratic Party and dominated the first night of debates in Detroit on Tuesday.

The crowded Democratic field of about two dozen candidates is vying for the right to face Republican President Donald Trump in the November 2020 election.

Biden, who struck a sharper and more aggressive tone than in the first debate, ridiculed Harris’ contention that her recently unveiled plan would not require a middle-class tax increase or eliminate private insurance plans.

“You can’t beat President Trump with double-talk on this plan,” Biden told Harris. “The plan no matter how you cut it costs $3 trillion. It will require middle-class taxes to go up, not down. Thirdly, it will eliminate employer-based insurance.”

Harris rejected Biden’s description as “simply inaccurate” and ripped into Biden’s proposal to build on President Barack Obama’s healthcare plan, popularly known as Obamacare, and include a government-run option, saying it would leave millions uninsured.

“In 2019 in America for a Democrat to be running for president with a plan that does not cover everyone, I think is without excuse,” Harris said.

The early fireworks were expected after Biden had engaged for weeks in an escalating fight with Harris and U.S. Senator Cory Booker for the support of black voters, a vital constituency in the Democratic nominating battle.

Biden was flanked at center stage by Harris and Booker, the most prominent black contenders in a Democratic nominating contest in which race has played a prominent role.

He cited that diversity on stage in his opening statement, contrasting it with Trump’s recent attacks on Democratic minority lawmakers that have been widely criticized as racist.

“Mr. President, this is America, and we are strong and great because of this diversity, Mr. President, not in spite of it,” he said to Republican President Donald Trump.

“Let’s get something straight, we love it, we’re not leaving it, we’re here to stay and we’re certainly not leaving it here to you,” said Biden, who was vice president under Obama, the first black U.S. president.

Seven other candidates, including former U.S. Housing Secretary Julian Castro, Washington Governor Jay Inslee and U.S. Senator Kirsten Gillibrand, joined them on stage in Detroit in search of a breakout moment that will generate new momentum for their campaigns.

“Tonight, we have to get to the heart and soul of who we are as Democrats,” said New York Mayor Bill de Blasio in his opening statement. “There are good people on this stage but there are real differences.”

Biden admitted he was taken by surprise last month when Harris criticized him for opposing federally mandated busing for school integration in the 1970s and for working with segregationists while serving in the U.S. Senate decades ago.

The sharp attack gave Harris a bump in the polls, and Biden’s feeble response led to a dip in his standing although he has recovered in some recent polls and still maintains a firm grip on first place.

During the candidate introductions on Wednesday, Biden told Harris to “go easy on me, kid.” His comment was picked up by a microphone. 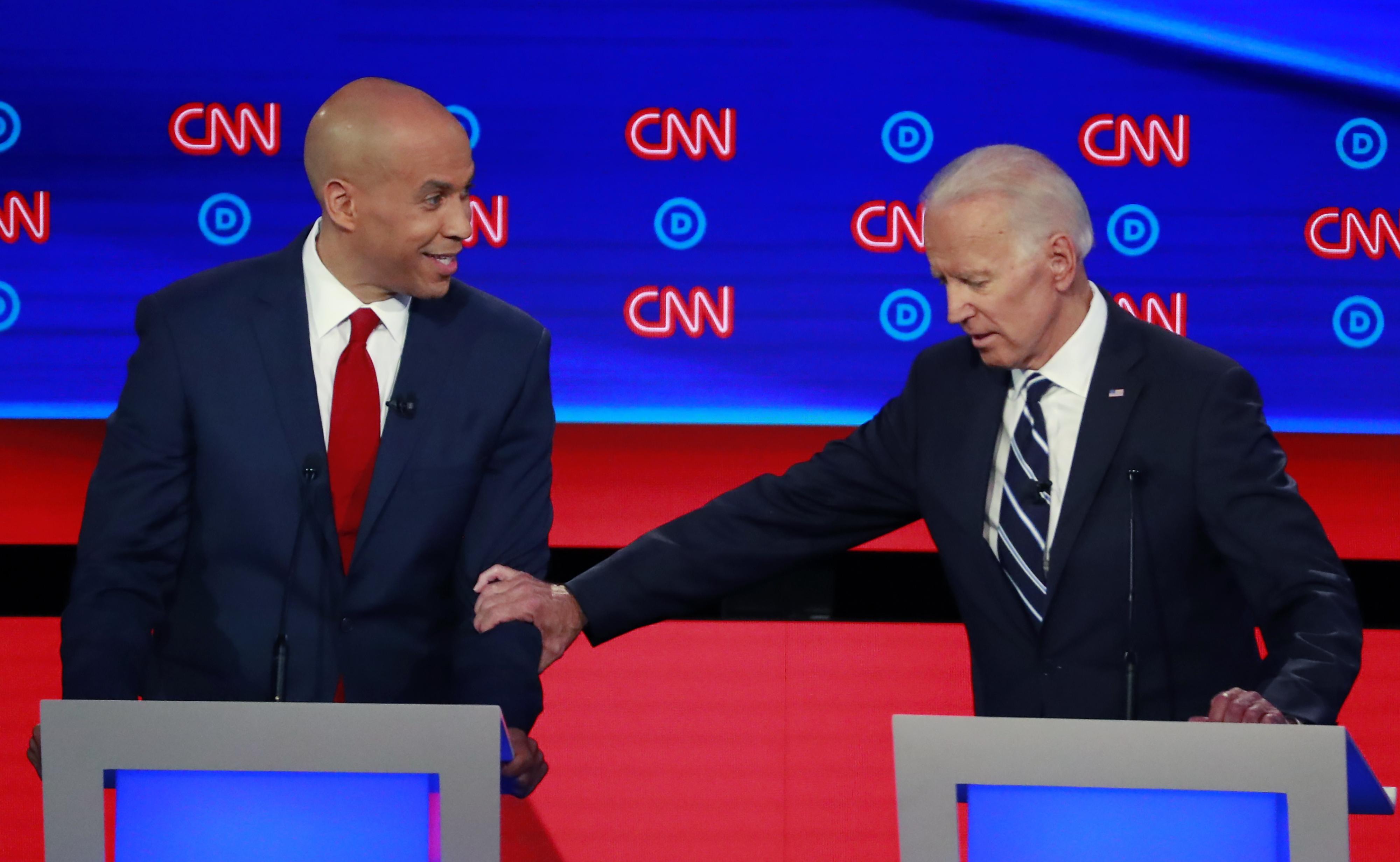 The debates come about six months before Iowa holds the first nominating contest, and the two nights in Detroit could be the last chance for many of the lower-tier contenders to make an appearance on the national debate stage.

The Democratic National Committee will double its fundraising and polling requirements to qualify for the next debates in September and October, leaving out more candidates and raising questions about their ability to continue their campaigns.

So far, only about a third of the field has met the qualifications.