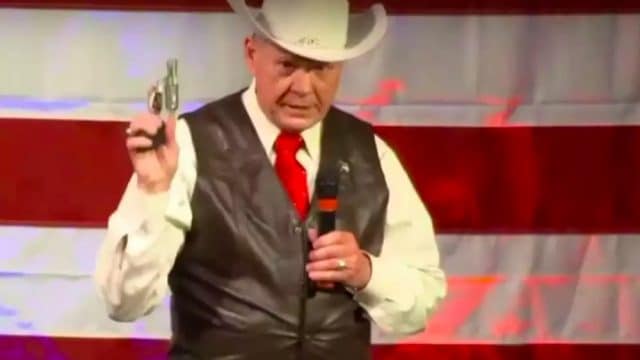 Roy Moore, the accused child molester and anti-LGBTQ nut who in 2017 lost Republicans a U.S. Senate seat in red state Alabama, has announced that he’ll be running for the same seat in 2020. Republicans are dead set against his candidacy, and between all the in-fighting and the fact that Moore is an awful bigot, we don’t know if we’re delighted or terrified. Let’s examine our feelings.

You may recall that Moore used to be an Alabama Supreme Court Justice, but he got fired in October 2016 for ordering his state’s probate judges not to issue same-sex marriage licenses after the U.S. Supreme Court legalized marriage equality nationwide. He also thinks that gay people are like Nazis and he wants gay sex to be illegal because it’s no different from raping a cow, though he’s not sure whether gay people should be executed for it — it’s a complicated issue, and he needs more time to think it over, okay?

Moore also thinks that the U.S. was better off under slavery, that Muslims and women shouldn’t work in government.

Anyway, during Alabama’s 2017 special election, Moore was accused of molesting a 14-year-old girl, assaulting and abandoning a 16-year-old girl and pursuing three other young girls when they were just 16 and 18-years-old.

When Moore lost what should’ve been an easy, slam dunk election, he refused to concede, blamed LGBTQ people for his alleged pedophilia, claimed half of his state’s voters wanted to destroy America, asked Alabama courts to block his opponent’s victory (they refused) and then set his followers against his political opponent’s gay son.

Trump, his idiot son and Senate Majority Leader Mitch McConnell have all urged Moore to not to run, but Moore will not be discouraged by these institutional Republicans!

Moore will have to win a crowded Republican primary before he gets a chance to lose a U.S. Senate seat again. And while there’s a scary (but longshot) chance that Moore could actually win, it’s far Moore likely (see what we did there?) that he’ll simply get dragged through the mud while he shoots himself and his Republican colleagues in the feet — and we are here for it.

Grab the popcorn, kids. It’s gonna be fun to watch.