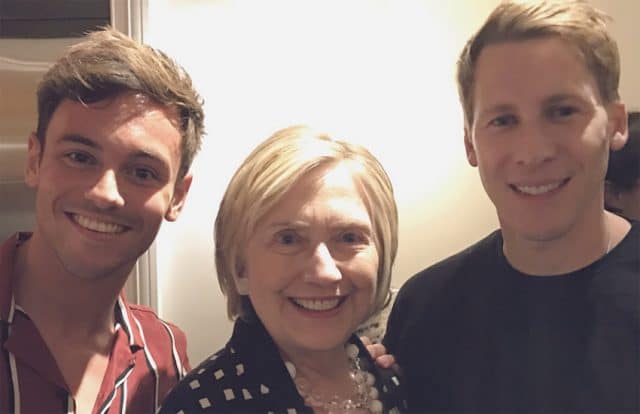 Tom Daley has shared pictures of him and husband Dustin Lance Black meeting Bill and Hillary Clinton at a film screening.

The Olympic diver posted the pictures on Instagram yesterday, although the meeting took place in New York City last week.
Tom shared a picture himself with Dustin and Hillary along with the caption: ‘NYC has been so much fun! Got to meet some amazing people!’

NYC has been so much fun! Got to meet some amazing people ❤ @hillaryclinton @dlanceblack ?: @gradykeefe

He then shared a picture of he and his hubby deeply engaged with Bill, with the former president resting his hand on Milk screenwriter Dustin’s shoulder.

Perhaps the Oscar winner is gunning for the White House next!
The Clintons and the Daley-Lance Blacks met at a screening of Rebel In the Rye on Thursday. The film, about The Catcher in the Rye author J.D. Salinger, stars Nicholas Hoult.

The British actor previously appeared in the queer classic A Single Man, an adaptation of the Christopher Isherwood novella.

Fans of Tom and Dustin will no doubt be confused – news broke on 7 August that the guys were enjoying a belated honeymoon in Barcelona on Monday 7 August.

They shared their last photos of the trip on Saturday 12 August.
International travel and seemingly the ability to be in two places at once – we want their lives!