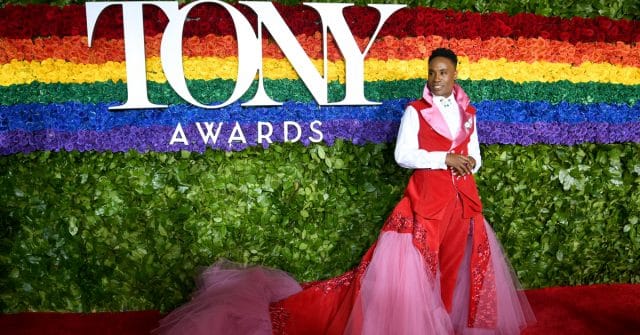 Pose star Billy Porter wore a custom-made gown with a uterus-patterned train to yesterday’s (June 9) Tony awards, in a show of solidarity with people campaigning for abortion rights in the US.

The gown was made from the curtain backdrop of the Kinky Boots production on Broadway, for which Porter, 49, won the 2013 Tony for best actor in a musical for his role as Lola.

The red velvet ensemble featured a train with a subtle uterus pattern – a powerful pro-choice message during a turbulent political climate for abortion rights in the US.

“I thought it was awesome because women’s rights are under attack right now. I’m an advocate for all who are disenfranchised,” Porter said to The Hollywood Reporter.

“None of us are free until we’re all free!” he said.

Of his dress, Porter said, “It’s a beautiful nod to Elizabethan couture. At the fitting, we spoke about making a pattern on the train that was in the shape of a uterus, but not obvious, of course.”

“And I thought it was awesome because women’s rights are under attack right now.”

“I really want to make sure that I’m showing up for all of the disenfranchised people I can so that we can find power in our unity. This government is trying to take away the woman’s right to choose and that’s unacceptable. No!” Porter said.

Porter has a track record of eye-catching outfits. At this year’s Met Gala, he stole the show on a star-studded red carpet, in a stunning bejewelled catsuit—complete with 10-foot gold wings.

Porter was carried into the Met Gala, which this year celebrated all things camp, on a litter carried by six shirtless men.

The American Horror Story actor walked the 2019 Oscars red carpet with his husband, Adam Smith, in a stunning tuxedo dress.

“I want to flip the question of what it means to be a man,” Porter told The New York Times. “This question of masculinity, this sort of microscope of heteronormative masculinity that we are very often held up to, especially as leading men, needs to be shattered.”

“You know, it’s toxic and I’m over it and I’ve lived it and I’m not doing it anymore,” he said.