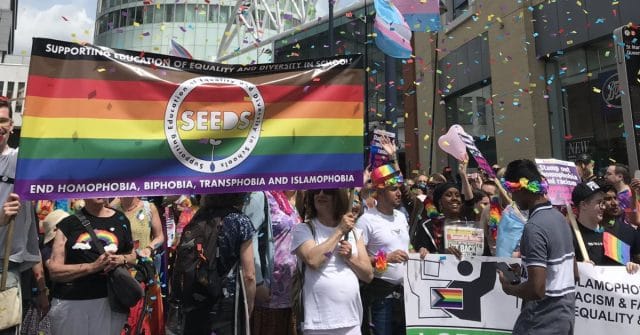 Birmingham Pride attendees took to Twitter on 24 May to gush about the event’s ‘incredible atmosphere’ and ‘stunning’ displays of solidarity despite the continued LGBT lesson protests that have been taking place in the city.

As they started marching, the trio were seen holding banners for ‘No Outsiders‘, a programme created by Moffat to promote tolerance and acceptance.

“I’m overjoyed that Birmingham Pride have asked me. My role is to stand up here and say that  ‘No Outsiders’ needs to be taught in schools because this is how you help end homophobia – by teaching children about different people from an early age.”

Moffat, Razzaq and Qureshi were flanked by several other minority groups, including he UK’s leading LGBTQ Muslim charity Imaan, as they walked from Bennetts Hill towards the Gay Village. The official theme of this year’s procession is Love Out Loud, a positive message that hopes to encourage those from any walk of life to have the courage to live their lives freely and openly.

Unmuted, a Birmingham-based social and peer support network for people of colour who identify as Lesbian, Gay, Bisexual, Transgender, Queer or Intersex (LGBTQI) marched along with the parade (Rasheed Rahman/Twitter)

Moffat is currently working as an assistant headteacher at Parkfield Community School in Saltley, which was the first institution to be targeted by those angered by the teaching of LGBT equality being a part of the national Equality Act. Since then, it is believed that conservative Muslims, Christians and Jewish people have “hijacked” the cause and have been conducting their own disapproving demonstrations in Manchester and London.

Overwhelmed by the event, one social media user took to Twitter to say, “This is fantastic. Birmingham is an amazingly accepting and open queer space from my experience. The parade being led by Queer Muslims is a massive, massive message of defiance and leadership. Especially with what is happening with the protests outside of schools. Happy Pride!”

“Super proud of the Muslim community and lgbtq parents for coming together for inclusive education,” someone else added.

Another wrote: “So much joy, togetherness and love! Have an incredible day everyone!”

“Given recent protests in our city, it’s more important than ever that today we stand together in the face hatred and be a united voice for those prevented from doing so,” a fellow attendee explained. “Be proud of who you are.”

Another said: “Incredible to see such solidarity and love in the face of such divisive rhetoric!”