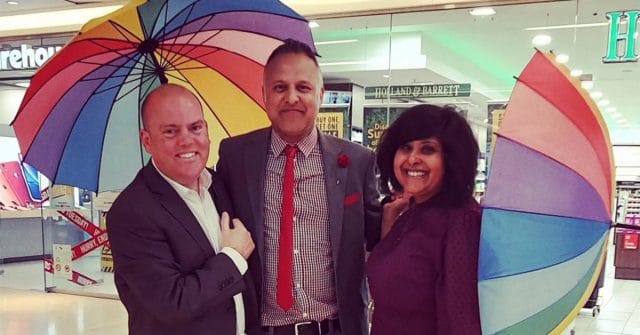 Members of Birmingham’s Muslim community will walk at the front of this year’s Pride parade alongside the primary school teacher at the centre of a row over LGBT-inclusive relationship education.

Andrew Moffat, assistant head teacher at Parkfield Community School and pioneer of the inclusive No Outsiders programme, will walk “arm in arm” with LGBT+ Muslim campaigners on Saturday (May 25).

Birmingham Pride co-director Lawrence Barton said: “We’re delighted that Andrew [Moffat] is going to be leading the carnival parade this year, joined by Muslim friends, in a space that celebrates equality, freedom, respect and tolerance for all communities.

“There’ll be many families from all different types of communities shoulder to shoulder with the LGBTQ community, and to have Andrew at the front of that with Muslim friends, that’s the message we’re sending out this year,” he added, according to I Am Birmingham.

Moffat will be joined by Saima Razzaq from the diversity group Supporting Education of Equality and Diversity in Schools (SEEDS), and Khakan Qureshi, founder of Finding A Voice—a support group for south Asian LGBT+ people.

Announcing her involvement, Razzaq wrote on social media: “As a gay Muslim woman, visibility for me is more important than it’s ever been. Whilst the fanfare outside schools continues, protestors need to understand that their actions will have a devastating impact on children from all communities.

Qureshi is one of many who have spoken out against the protests which have been taking place outside of schools across Birmingham over the past few weeks.

He has called the protestor’s behaviour “disgusting,” telling the Birmingham Mail on Thursday (May 23): “If the community want us to be brothers and sisters, it’s about solidarity and support for each other, so how can you do that if you have conflict and barriers?”

The protests began in March, when a group of mostly Muslim parents who took offence to Moffat’s No Outsiders programme pulled their children out of school.

In the ensuing weeks, demonstrations have taken place at several schools in Birmingham and Manchester, leading to a national debate on LGBT-inclusive education.

On Friday, Anderton Park Primary School was forced to close its doors early due to a mass protest reportedly attended by 400 people.