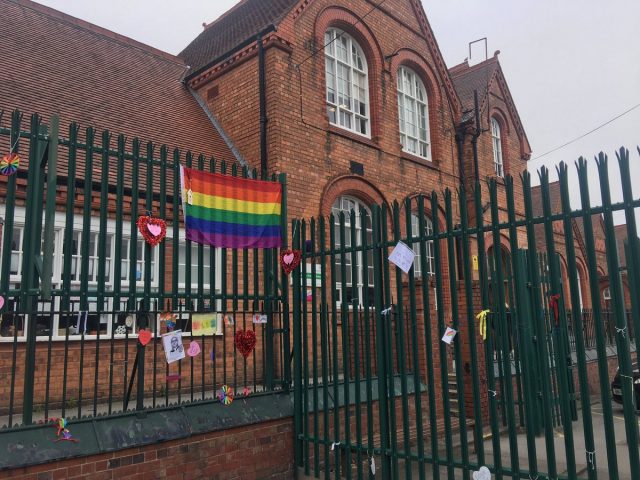 Birmingham City Council has been granted an interim injunction to prevent protesters from gathering at school gates in the city over LGBT+ lessons.

The injunction has been granted after protesters gathered for weeks outside Anderton Park Primary School over teaching around LGBT+ issues.

However, Birmingham Live reports that the council was forced to take action and was granted an interim injunction this afternoon in the High Court.

The injunction will prevent protesters from gathering at the gates of Anderton Park Primary School over teaching around LGBT+ equality.

Councillor Ian Ward, Leader of Birmingham City Council, said he was pleased that “common sense” had prevailed, as children should be free to go to school without disruption.

“All our schools must be safe spaces and we will not tolerate the ongoing intimidation of parents, hard-working school staff and local residents,” Ward continued.

“This interim injunction has been secured in time for the return to school on Monday (June 3) and now hopefully the pupils will be able to continue their education in peace for the remainder of the summer term.”

Protests led by Shakeel Asfar have been focused on Anderton Park Primary School in recent weeks. The row has made headlines across the UK as some parents, and other members of the community, object to children learning about LGBT+ people.

This week, human rights lawyer Nazir Afzal was brought in to broker peace between parents and school officials over lessons which taught young children about different types of families, including children with same-sex parents.

Teachers at the school were this week reported to be breaking down in tears due to hostility from parents protesting LGBT+ inclusive teachings.

Earlier this year, the school’s head teacher Sarah Hewitt-Clarkson said she had been receiving threats by phone and email over LGBT+ lessons taking place in the school.

The threatening messages are being investigated by police.

Speaking to PinkNews in March, Hewitt-Clarkson said the school would “not bow” to demands to stop their LGBT+ inclusive curriculum.

“Equality is a real strength of ours, the children talk about it all the time. We want to usualise the language of equality.”