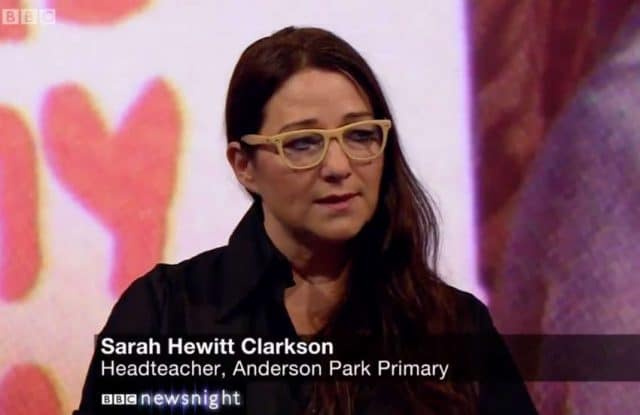 A headteacher at a Birmingham school which has experienced multiple protests over LGBTI-inclusivity lessons has spoken of her relief over a ban on further demonstrations.

Hewitt-Clarkson says she has received various forms of abuse from people opposed to the lessons.

This comes after Birmingham City Council .

Some protestors have already announced that they will challenge the court order.

Speaking to Being LGBTQ Podcast, Hewitt-Clarkson described the disruption and fear the demonstrations had in the school.

‘We’ve lived through nine weeks of this, and we know how damaging and harmful it’s been to all of us. The children mainly,’ she said.

‘So their safety was really at risk, and so we had to do something. And really this is the highest level we could’ve gone. It’s absolutely fantastic,’ Hewitt-Clarkson added.

that while she supported the right to peaceful protest, there should be ‘consequences if [the protest] spills over into hatred or causes distress and alarm and harassment, which it has done to a huge extent for my staff and the children in my school’.

She said she has experienced verbal from people as opposed to the lessons on numerous occasions.

‘[A week ago] I was called a pedophile, and on social media I’ve been called a hater of Islam,’ Hewitt-Clarkson said. The headteacher added that she had had to listen as demonstrators with megaphones ‘screaming about my school [and] about me’.

Though praising the injunction, Hewitt-Clarkson said she was unsure whether or not the ban would help the situation in the long-term. She said she was concerned the injunction might be ineffective or fuel further backlash against the school.

‘[The injunction] has been inflammatory overnight because we’ve seen social media posts already, which is interesting because that’s one of the things that are banned and we’ll see what happens with that,’ she said.

One of the protest leaders, Shakeel Afsar – despite not having children at the school – has vowed to challenge the court order and continue to oppose any LGBTI-inclusivity lessons.

‘For several weeks we have been arguing for our rights – our parental rights – to decide when a child should have what information,’ he said.

Afsar also said there was a protest had been arranged for Friday, 7 June, prior to the injunction being announced.

The demonstrations gained traction and spread to other schools in the city which taught similar classes.

The protestors, who are mostly, but not exclusively, Muslim, argue that primary school children are too young to learn about LGBTI issues. They have also argued the LGBTI-inclusivity lessons go against Islam.

Nazir Afzal, a former chief prosecutor for the north-west of England, has been brought in as a mediator between Anderton school officials and parents.

Afzal said that some protestors were falsely claiming the LGBTI-inclusivity classes were teaching children about homosexual sex.

He said that ‘whatever [the] agenda’ of non-parents opposed to the lessons, they needed ‘to walk away’ so parents could continue their dialogue with the school.

‘By all means protest. Protest outside the town hall, the education department, but protest against adults, not against five and six-year-old children and the people trying to look after them and safeguard them and teach them,’ Afzal added.

He also said that hundreds of parents were happy with the school, but were ‘under a tremendous amount of pressure not to go in and speak to Sarah [Hewitt-Clarkson]’