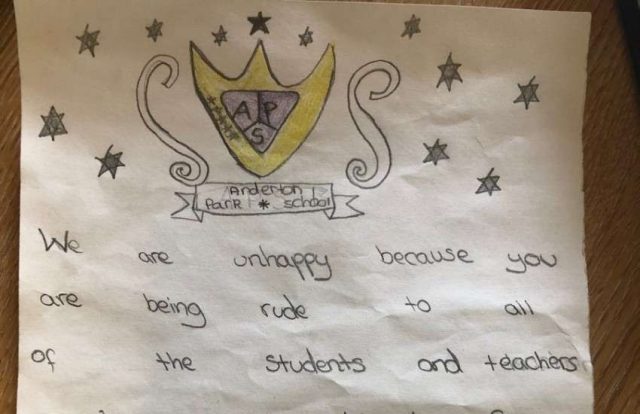 Following weeks of protests outside Anderton Park Primary School in Birmingham, UK, two students at the school wrote a letter to protesters requesting they no longer ‘disturb’ their lessons.

As protests and back-and-forths about LGBTI lessons continued, four more schools in the city . The protests and contentious debate has continued, with MPs getting in the fray and voicing opinions either for or against the lessons.

The latest development involves a handwritten letter from two students at Anderton Park, one of the schools affected by the protests.

Head teacher Sarah Hewitt-Clarkson tweeted out the letter on Wednesday (22 May).

The letter reads: ‘We are unhappy because you are being rude to all of the students and teachers, especially our headteacher.

‘So please don’t disturb us when we are trying to learn and don’t lie to us. Thank you.’

Many of the protests in the Muslim-majority area stem from believing children are too young to learn about LGBTI topics, or that LGBTI topics contrast with Islamic teachings.

Others, however, including LGBTI advocates and Muslim LGBTI groups, have condemned the protests, saying they don’t represent Birmingham or Muslims.

Gay singer k.d. lang sent a message of support to Andrew Moffat, the teacher at the center of the controversy, who led the No Outsiders program.

‘I would tell him to stay strong and stay compassionate to the other side,’ she said in a statement.

‘It all goes wrong when you see your opposition as enemies, when it’s just a matter of education and openness. I know that in the face of that hatred it does get very difficult at times to stay compassionate, but everyone has their reasons for what they believe. You have to stay open, as hard as it is. Hate is a powerful weapon, so you have to be super flexible to absorb the impact.’

Lang came out as a lesbian in 1992 and said people picketed the Grammys after. She had to be strong during that time and now encourages Moffat to do the same.