Rob Smith, a former activist during the “don’t ask, don’t tell” era, became a conservative because of the Democratic Party’s “outrage culture.”

Despite his liberal upbringing and history of progressive activism, a black gay man and military veteran has “come out” as conservative.

Rob Smith, who currently works as a journalist in New York, served in the army from 2000–2005. He wrote a book about serving during the “don’t ask, don’t tell” era and was an activist for LGBT rights in the military before President Barack Obama repealed the policy in 2011. Now, Smith says “outrage culture” he experienced within the Democratic Party has pushed him to align himself with conservatives.

“For me, as a black gay man, I have to [say something,]” he told Daily Mail U.K. “Somebody has to start the conversation… to say being a Democrat is not a sign of morality and being a Republican is not a sign of evil.” 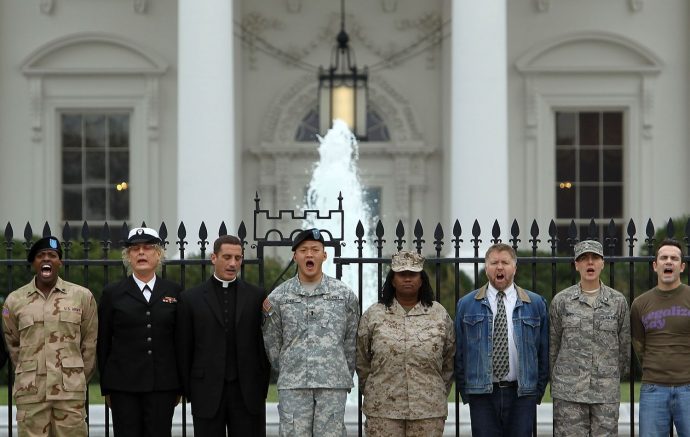 Smith (above left, staging a protest against “don’t ask, don’t tell” in 2010) added that he chose to speak up about his political affiliations after Kanye West’s tweets in support of President Donald Trump (and his hot takes whether slavery was a “choice”) rendered the rapper lambasted. Smith agreed that West’s comments about slavery were “indefensible”; however, he stood by the artist’s right to have a controversial political opinion.

You don't have to agree with trump but the mob can't make me not love him. We are both dragon energy. He is my brother. I love everyone. I don't agree with everything anyone does. That's what makes us individuals. And we have the right to independent thought.

“How much has Kanye West done for black culture in entertainment?” he asked. “I just looked at this whole thing and I just said, ’Well, if it can happen to Kanye, it can happen to anybody.’ What am I supposed to be, afraid to have different ideas?”

“What I hope is that somebody [who’s] black and gay and conservative [becomes] normal,” Smith added. “But you have to understand that I am not the first black gay Republican. I’m just the one that’s going to take the heat for saying it publicly.”

To his point, Smith is far from the first gay conservative to come forward about his unexpected political beliefs. Other out journalists, including far-right political pundit and former Breitbart News editor Milo Yiannopoulos, and former Out magazine editor Chadwick Moore, have received flack for their problematic and offensive comments about other marginalized groups.