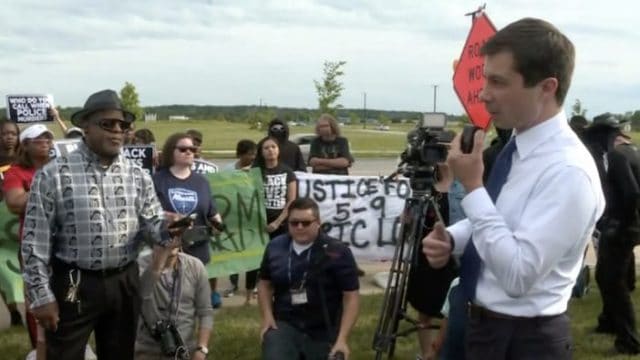 This Friday, Mayor Pete Buttigieg expected to be at a Democratic party fish fry in South Carolina with his fellow presidential candidates. Instead, he flew back home to South Bend, Indiana where he was faced by Black Lives Matter protesters upset over the death of Eric Logan. Logan, a 54-year-old black man, was shot by a police officer who had his body cam turned off.

At approximately 6:30 p.m. yesterday, Buttigieg arrived at the South Bend Police Department and faced the crowd of protesters, including Logan’s family members and other people affected by police violence. According to The New York Times, Buttigieg was “preternaturally calm” as he responded to 10 demands put forth by the crowd.

Tensions were high as the crowd accused Buttigieg of inaction. Shirley Newbill, Eric Logan’s mother, told Buttigieg “Y’all ain’t doing a damn thing about me or my son or none of these people out here.” Another protester asked the candidate, “Are you really here because you care about blacks, or are you just here because you want to be the president?”

Eric Logan was killed by Sgt. Ryan O’Neill. O’Neill was responding to a report that cars were being broken into. As he approached Logan, O’Neill neglected to turn on his body cam. According to O’Neill, Logan had a knife and refused to drop it. O’Neill shot Logan in the stomach; another officer drove Logan to the hospital in a squad car.

Eric Logan’s family is filing a federal civil rights lawsuit against South Bend and the officer who shot him.