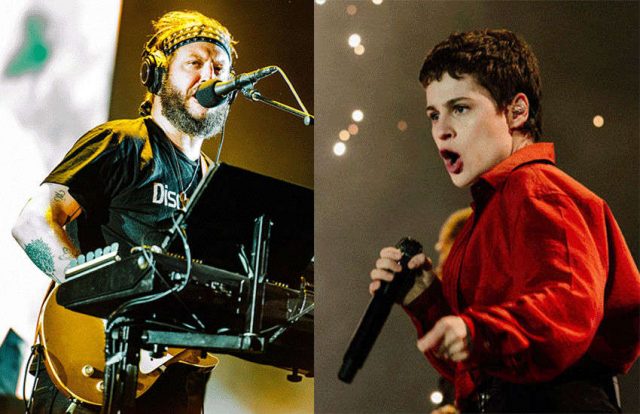 A truly curious heterosexual energy in London’s Victoria Park last night, as All Points East headliner Bon Iver took to the stage for their headline slot, before a swaying audience of 20,000.

’At least two thirds of these people are sensitive straight guys,’ I silently speculated.

Indeed, at nightfall, as the crowd hummed-sang along to Justin Vernon’s gorgeous falsetto – hauntingly beautiful, emanating from an intensely unruly beard – I saw three men to huddle together. Their shoulders juddering as though they were weeping.

On closer inspection, I realized the one in the middle was, in fact, urinating. The other two were shielding the view from onlookers.

They weren’t crying, but physically shaking with laughter.

Still, Bon Iver’s delicate energy cast its spell on most of the audience.

During moments of sparsity on the lower key tracks – of which, of course, there are many – you could almost hear a pin drop. Or rather, every isolated beat and string of countless flawless songs. My favorite? Perth.

At such points I’d turn behind me to see if the crowd was disengaged. (There’s nothing more awkward than a bored, static gig-goers, is there?) But they weren’t. They were enthralled.

Still, I’m personally unconvinced Bon Iver are right for such a setting. l wish to consume such gorgeous music as intimately as possible – just me, will do just fine.

That’s not to say Just and his bandmates didn’t bring drama. Drummer S. Carey was feverish, saxophonist Michael Lewis in a romantic trance whenever their image was protected onto the big screens. Straights whooped with delight.

During climactic moments, songs hit you full blast – evidently, plaguing the festival elsewhere evaded me – and while it was thrilling, it’s a departure from the classic Bon Iver headphones experience.

My last minor criticism: Justin’s isolated voice is faultless, but the vocal trickery – modification, layered digital harmonies – isn’t quite as elegant through ginormous speakers as you might think. I’m not going to lie: I thought of Cher. But then again, what’s new?

There was drama and then some at Christine and the Queens headline slot the weekend before. Plus, quite a different crowd.

Namely, lots and lots of sprightly, outrageously dressed young LGBTIs bobbing up and down like excited bunnies. Leading the pack was Chris herself. Her energy’s boundless: she aced every complex dance routine, physically leapt around the stage.

Her look, meanwhile, was fabulously androgynous. I find her masculine energy (or ‘arrogance’ as my friend said – and meant as a compliment) totally compelling. And never more so than when stalking the stage like many a guy I’ve lusted over on the dancefloor.

My favorite thing about her, though, is that celestial voice. It pierced last weekend’s damp air with crystal clear clarity. Forgive me if this is reductive, but it makes me think of sirens and princesses. (Could something mythical and magical work for the next album campaign theme?).

To hear it on Saint Claude, for my money one of the most moving songs of the decade – and better yet, to hear the story of what inspired it: Christine witnessing a homophobic attack and wishing to atone for not helping – was a privilege. A faultless outing for the star’s first-ever headline festiva slot.