Home Gay Life Bones exhumed in the Vatican in renewed search for girl missing since... 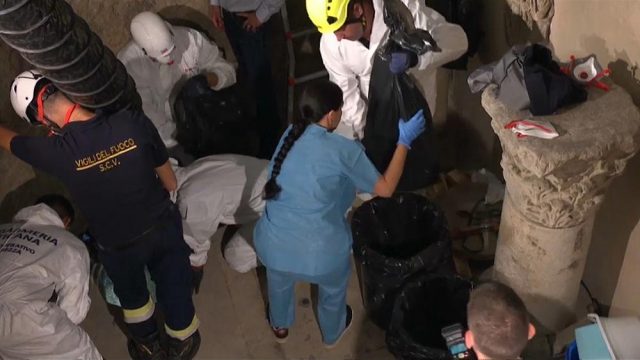 Forensic experts extracted bones from two ossuaries within the walls of the Vatican on Saturday as part of an ongoing investigation aimed at resolving the case of a girl who vanished in 1983.

Following an anonymous tip-off, the Vatican earlier this month opened two tombs to see if the body of Emanuela Orlandi, the daughter of a Vatican clerk, was hidden there.

Instead, they ran into a new mystery when nothing was found, not even the bones of two 19th century princesses who were supposed to be buried in the tiny Teutonic Cemetery.

After consulting Vatican records, the Vatican announced last week they had located bones under the floor of the Pontifical Teutonic College, which flanks the graveyard.

Structural work was carried out in the cemetery at the end of the 19th century and again about 60 years ago.

Church officials believe the remains of Princess Sophie von Hohenlohe, who died in 1836, and Princess Carlotta Federica of Mecklenburg, who died in 1840, might have been moved and never taken back to their original resting place.

The Vatican has not speculated about whose bones might have been recovered from the ossuaries on Saturday, saying only that they would now be analysed to try to establish their identities.

Amongst those present was lawyer Laura Sgro representing the Orlandi family and Vatican’s Promoter of Justice Gian Piero Milano.

Emanuela Orlandi disappeared in 1983 after she left her family’s flat in Vatican City and headed to a music lesson.

Theories about her disappearance have run the gamut from an attempt to secure freedom for Mehmet Ali Agca, the Turk jailed in 1981 for trying to assassinate Pope John Paul II, to a connection to the grave of Enrico De Pedis, a mobster buried in a basilica in Rome.

His tomb was opened in 2012 but nothing was revealed.