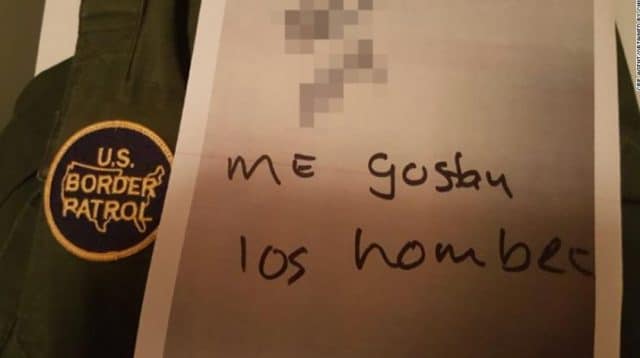 US Customs and Border Patrol agents at a Texas migrant processing center allegedly sought to humiliate a Honduran migrant by making him hold a sign that read, “Me gustan los hombre(s),” which translates to “I like men,” while being paraded through a migrant detention center in front of a group of other men who had also been detained.

CNN has obtained emails written by a Border Patrol agent who witnessed the March 5th incident and went on to detail other incidents of inappropriate behavior by agents, and a failure of management to police their employees.

The agent who wrote the note and a second agent were laughing about what had happened, according to the email. Neither agent responded when told the behavior was unprofessional.

Seeing that the migrant was visibly upset, the agent who reported the incident took the note away and told a senior agent. The supervisor did not take any action.

The allegations of the agents’ conduct come on the heels of a report by ProPublica this week that revealed a closed Facebook group for current and former Border Patrol agents that featured jokes about migrant deaths and derogatory comments about Latina lawmakers.

In response to CNN, a CPB official told the news outlet “I am forwarding to the Office of Professional Responsibility, the office charged with looking into these allegations.”