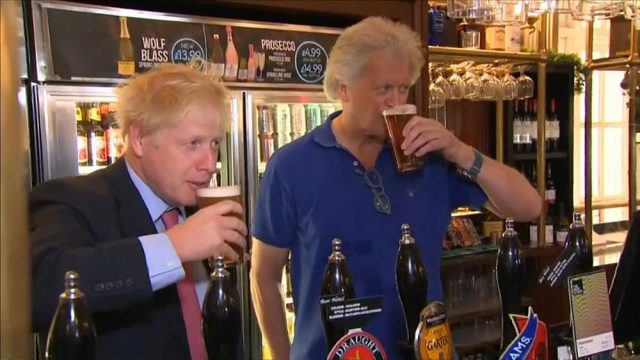 Boris Johnson is in pole position to become the next UK Prime Minister but even before the final vote takes place on the leadership race to Number 10, he is already is at the centre of a diplomatic storm.

His underwhelming endorsement of the former British Ambassador to the U.S. Kim Darroch in a TV debate earlier this week is believed to have been a factor in Darroch’s decision to resign. Now Johnson’s allies are demanding that the empty post should remain unfilled, at least until there’s a new occupant in Downing Street.

Euronews’ correspondent in London Tadhg Enright says that Theresa May stood by Darroch after his emails were leaked ‘but Boris Johnson, quite likely the next UK Prime Minister, has been blamed for the ambassador’s decision to resign.’ He also noted that ‘what Boris Johnson says and what he does really carry some weight at this stage in the game.’

Read more: Sir Kim Darroch, the UK’s ambassador to the US, resigns after row over leaked Trump emails

During the ITV leadership debate Boris Johnson, when asked about if he fully supported Kim Darroch as the UK ambassador in Washington, Johnson’s response was that he had a good relationship with Donald Trump and had had an incredible relationship with the White House during his time as Foreign Secretary to the UK, failing to back Kim Darroch who had been called ‘a very stupid guy’ by the U.S. president.

After the then UK ambassador resignation a day later, Johnson was again asked about his opinion. This time Johnson paid tribute to his former colleague, calling him ‘a superb diplomat’.

The stark contrast between his positioning on the matter just 24 hours apart has drawn criticism, with some people claiming Johnson had ‘thrown Kim Darroch under the bus.’

Watch Good Morning Europe’s report by Tadhg Enriright from Westminster in the player above.