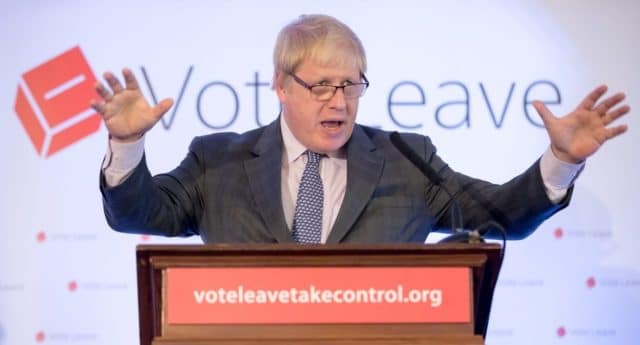 Mr Johnson, the former editor of the right-wing Spectator magazine, earlier this week jumped to the defence of Spectator columnist Toby Young when he was handed a job by the government.

The politician dismissed outrage over Mr Young’s use of homophobic slurs, attacking the “ridiculous outcry” about him using the terms “hard-core dykes” and “queer as a coot”..

But now Mr Johnson’s own deeply homophobic past has come to light.

Business Insider exposed columns written by Mr Johnson in his previous life as a journalist.

Mr Johnson deployed homophobic slurs and innuendo in a 1998 article about the resignation of Peter Mandelson, who had long been the subject of rumours about his sexuality. 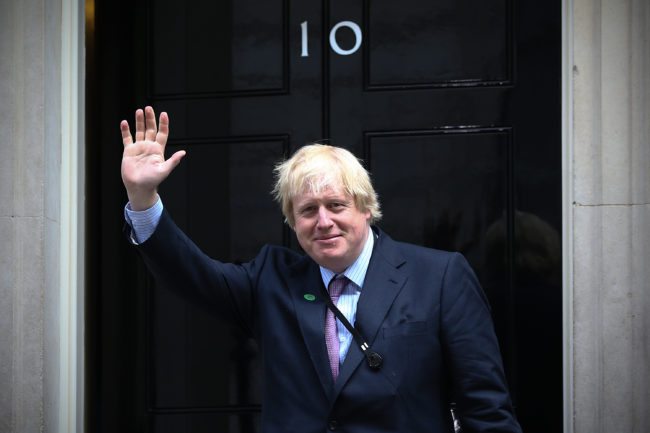 He wrote: “Weep, O ye shirt-makers of Jermyn Street, ye Cool Brittannia tailors and whatever exists of human finer feeling. In the Ministry of Sound, the tank-topped bumboys blub into their plis.

“In the delicatessens of Elgin Crescent, the sawdust is sodden with tears. For months, years, Carla Powell will go into mourning, her plumage is black at night, For Mandy is dead, dead ere his prime!”

And in a 2001 book, he wrote of same-sex marriage: “If gay marriage was OK – and I was uncertain on the issue – then I saw no reason in principle why a union should not be consecrated between three men, as well as two men, or indeed three men and a dog.”

He previously came under fire for the dog remarks while running for Mayor of London.

The Brexit campaign leader also made a number of inflammatory remarks about women.

Mr Johnson’s comments contrast with a mixed and eclectic record on LGBT equality. 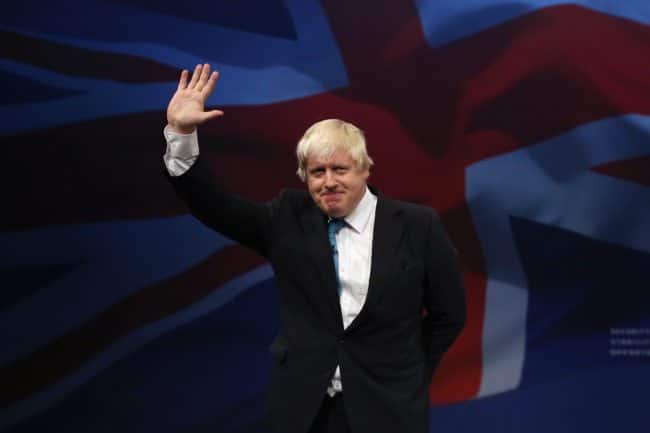 Labour’s Shadow Secretary of state for Women and Equalities, Dawn Butler, told Business Insider that Johnson should consider his position.

She said: “Boris Johnson’s track record and his defence of Toby Young, whose misogynistic and homophobic views he published as editor of the Spectator magazine, surely make him unfit to be the UK’s most senior diplomat.”

The Conservative was originally a strong supporter of Section 28, the law that banned the ‘promotion’ of homosexuality in schools, but later voted for its repeal in 2004 as an MP. He also voted for the introduction of civil partnerships.

But as Mayor of London Mr Johnson skipped the Pride march on a number of occasions.

Mr Johnson was one of the first senior Conservatives to support equal marriage, backing the move in a 2010 PinkNews interview.

As Foreign Secretary he has overseen modernisation on LGBT rights within the Foreign Office, throwing out guidelines that blocked British embassies and consulates from flying the rainbow flag across the world.

He has also spoken out for global LGBT rights, recently raising human rights abuses against LGBT people with his Russian counterpart.

Mr Johnson came under the microscope this week after speaking out in defence of Toby Young, who was appointed to serve at the Office for Students by Mr Johnson’s brother, universities minister Jo Johnson.

He said: “The OfS will have some responsibility for ensuring universities uphold free speech. That means defending the right of students, academic staff and visitors with unorthodox views to speak freely without being howled down by political extremists.

“Given that defending free speech will be one of the OfS’s priorities, there’s a certain irony in people saying I’m ‘unfit’ to serve on its board because of politically incorrect things I’ve said in the past.

“Some of those things have been sophomoric and silly – and I regret those – but some have been deliberately misinterpreted to try and paint me as a caricature of a heartless Tory toff.

“For the record, I’m a supporter of women’s rights and LGBT rights. Indeed, I was a supporter of gay marriage and debated Nigel Farage on the topic in public.”

Mr Young has long been outspoken in the political Twittersphere using the handle @Toadmeister – and since the appointment he has been under scrutiny over some of his past tweets.

In a 2010 message Mr Young branded George Clooney “queer as a coot”, while he responded to a male user on another occasion with the retort, “F**k you, penis breath”

On another occasion, referring to a picture of himself with a woman, he quipped: “Actually, mate, I had my dick up her arse”.

Mr Young appears to have since deleted the messages along with other profane comments.

But an article that Mr Young published to his blog in 2004 remains online.

The piece, which Mr Young told PinkNews was “a humour piece written for a New York men’s magazine”, recalls an occasion on which Mr Young dressed up as a woman in a bid to get into bed with lesbians.

He wrote: “As far back as I can remember I always wanted to be a lesbian. 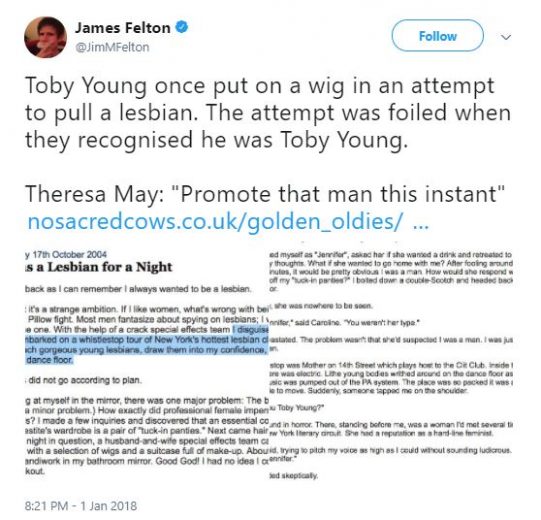 “I admit it’s a strange ambition. If I like women, what’s wrong with being a straight man? Two words: Pillow fight. Most men fantasize about spying on lesbians; I want to be one. So I became one.

“With the help of a crack special effects team I disguised myself as a woman and embarked on a whistlestop tour of New York’s hottest lesbian clubs.

“The plan was to approach gorgeous young lesbians, draw them into my confidence, then make out with them on the dance floor.” 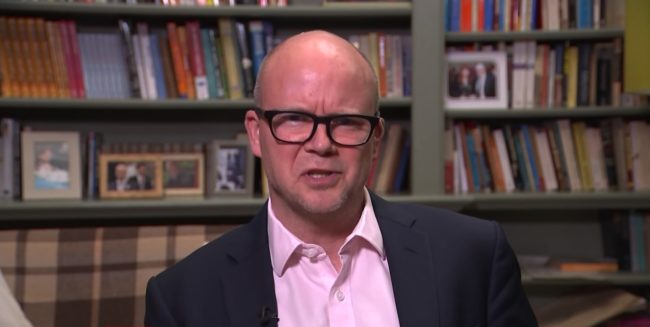 He added: “The first stop was Ruby Fruit on Hudson Street. The women in Ruby Fruit are not what you’d call lipstick lesbians. They’re hard-core dykes.

“I’d been warned by several veterans of the New York gay scene that if the denizens of Ruby Fruit discovered I was a man there was a good chance they’d beat the crap out of me.

“I joked that I wasn’t scared of a bunch of lesbians but, in reality, I was terrified. Several of them looked like German shot-puters. We decided to make a sharp exit.”

Mr Young worried: “I introduced myself [to a woman] as ‘Jennifer’, asked her if she wanted a drink and retreated to the bar to collect my thoughts.

“What if she wanted to go home with me? After fooling around with her for ten minutes, it would be pretty obvious I was a man.

“How would she respond when I whipped off my ‘tuck-in panties?’ I bolted down a double-Scotch and headed back to the dance floor.”

Responding to a request for comment from PinkNews, Mr Young defended the piece.

He said: “That was a humour piece written for a New York men’s magazine 14 years ago in which I dressed up as a woman for the evening and tried to pick up a ‘lipstick lesbian’.

“If you read the whole thing, you’ll see that I present the women I encountered in New York’s gay bars as strong and level-headed and far too sensible to be show any interest in me. I was the butt of the joke throughout.”

Mr Young told PinkNews that he is “a strong supporter of gay rights and have often defended them publicly”.

He wrote of trans people earlier this year: “I support transgender rights, but also think gender differences, inc psychological ones, are genetically based and not socially constructed.

“I reject post-modernism, but support equal rights for transgendered people. Moral case isn’t contingent on gender being a social construct.”

The body that Mr Young will play a key role in, the Office for Students, will be responsible for enforcing ‘free speech’ at universities amid battles over hate speech policies.

Universities minister Jo Johnson has handed the body powers to fine and sanction universities if they prevent events from going ahead due to controversial speakers.

The minister singled out controversies over speakers with anti-LGBT views, including author Germaine Greer.

Greer has said of transgender people: “Just because you lop off your d**k and then wear a dress doesn’t make you a f***ing woman”.