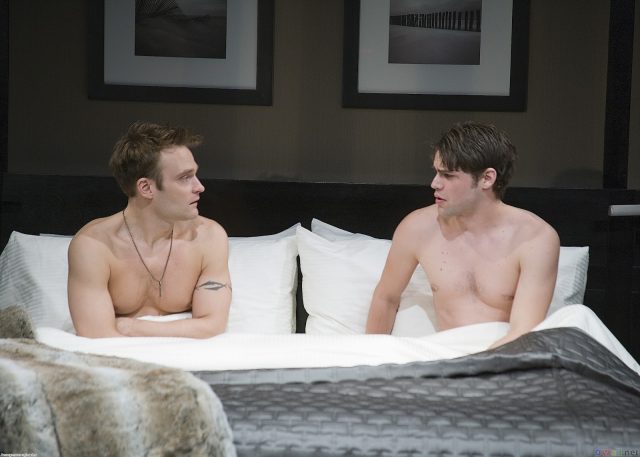 Think you’re relationship has issues? Just wait until you hear this guy’s story.

A man recently wrote to advice guru Dear Prudence for help with his boyfriend of two years.

“I’m a guy, and I have been seeing this man for almost two years now and he’s everything I have ever dreamed of,” the letter begins. “He listens to me, he remembers my birthday, he spends time with me, he takes me out, our sex life is phenomenal, and he’s introduced me to his family.”

So what’s the issue?

According to the man, his boyfriend insists he’s actually straight and that he’s “only gay in bed.” Even though they go on romantic dates and say “I love you” to one another and stuff.

Also, his boyfriend also has a girlfriend. Sort of.

“But she is asexual,” the man writes, “so they don’t have sex. She knows that we have sex, and she’s fine with it. It just feels odd to me.”

We’d say “odd” is an understatement.

But it gets even odder.

To make matters all the more confusing, the man says he and his boyfriend talk on the phone, flirt, and sext, like, all the time.

“He sends me random messages saying that he’s thinking of me and he misses me,” the man says. “He even says that he loves me before he hangs up the phone.”

But after two years of this, the man has finally had enough.

“I want him to admit that we’re dating; even if he doesn’t say it to anyone else, I just want him to say it to me,” he writes. “What should I do? I don’t want to break up with him because I really love him. But I also don’t want to waste my time if all I’ll ever be is his friend.”

In her response, Prudence wastes no time breaking things down.

She writes: “‘Remembering your birthday’ and ‘having good sex’ and ‘capable of listening’ are all great things to have in a relationship, but I promise you they are not some spectacular, once-in-a-lifetime qualities you can only find in this particular man.”

“Maybe ‘only gay in bed’ is a thing,” she continues, “but all the conversations and birthday-celebrating and family-meeting and loving texting that’s going on are hardly bedroom-exclusive activities. Your boyfriend isn’t just ‘gay in bed,’ he’s gay (or bisexual) with, and at, and on, and nearyou, an awful lot.”

Prudence adds that the man’s desire to be in a relationship with someone who is willing to admit they are dating is not “unreasonable.”

“If he’s not able to admit you two are going out, even just to you, you need to ask yourself whether you’re willing to go through another two (or four, or six, or 10) years of being his ‘buddy’ in public and his boyfriend in everything but name,” she says.

She concludes: “You might not want to break up, but I promise you, there are other men in the world who are capable of remembering your birthday, introducing you to their families, listening to you when you speak, and having great sex, all while calling themselves your boyfriend. Go find one.”

What advice would you give this poor fella? Sound off in the comments section below…