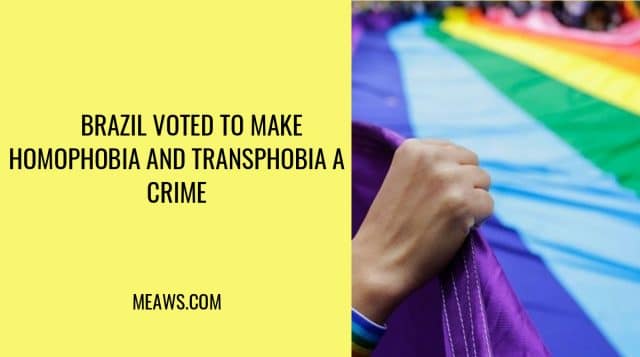 The Supreme Court of Brazil has voted to make homophobia and transphobia a crime, amid increasing discrimination against the Brazilian LGBT+ community.

Six of the Supreme Court’s 11 judges have now voted to make it a crime to discriminate against people based on their gender identity or sexuality.

The remaining five judges are yet to vote, but the result will remain unchanged – the new law will come into effect once all judges have voted and will make homophobia and transphobia crimes equivalent to racism.

“This is a day I never thought would come, especially with the president we have now,” Afonso Nogueira, a 36-year-old electrical engineer who plans to marry his boyfriend later this year, told theLos Angeles Times.

“The threats we live with on a daily basis might finally be taken seriously. Now, someone will have to do something about them. This shows that our lives matter,” Nogueira said.

Judges on the Brazilian Supreme Court are voting on two cases, brought by Brazilian rights group ABGLT and the Popular Socialist Party, which asked the court to acknowledge that the failure of Brazil’s Congress to criminalise violence against LGBT+ people is “unconstitutional” and to set a deadline for legal reform.

Brazil’s President Jair Bolsonaro was recently criticised for saying the country must not become a “gay tourism paradise.”

Bolsonaro has previously called himself a “proud homophobe” and insisted he’d rather have a dead son than a gay son.

Racism was made a crime in Brazil in 1989 and is punishable by up to five years in prison.

Until new legislation that deals with LGBT+ discrimination and criminalises homophobia and transphobia is approved, they will be framed within racism law, said the judges.

Brazil’s Senate is currently processing a bill that will make it a crime to discriminate against someone based on their sexuality or gender identity.

The country legalised same-sex marriage in 2013 and LGBT+ couples have the right to adopt children.

However, Brazil is also home to the world’s largest Catholic population and last year 420 LGBT+ people were killed in the country.

The remaining Supreme Court judges are scheduled to vote on June 5.