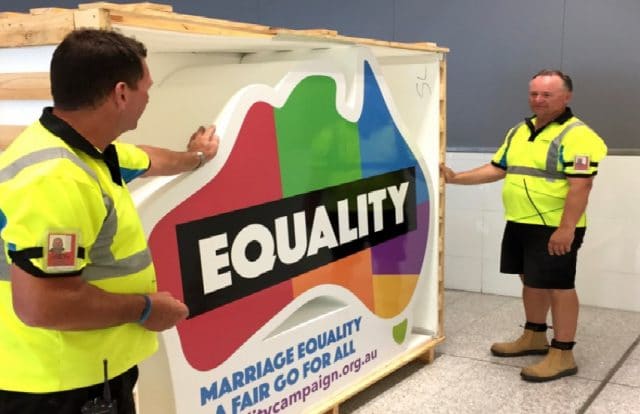 Australia’s Liberal Party government has just voted to retain its policy to decide marriage equality with a public vote – known as a plebiscite.

The party has just finished an emergency meeting to resolve the issue. Only seven out of 83 Liberal politicians voted for a free vote.

Last year the government tried to pass plebiscite enabling legislation but it was shut down in the Senate.

Since then, Prime Minister Malcolm Turnbull has stood firm that his government would stick to its guns on trying to forge ahead with a plebiscite.

Both the postal vote and plebiscite would be non-binding and still need to be voted on in parliament.

LGBTI people were hopeful that Australia was the closest it has ever been to achieving marriage equality after five ‘rebel MPs’ spoke out in favour of a free vote.

One of its leaders, Senator Dean Smith, released a draft Bill on Sunday which many hoped might be supported by his party and would lead to a free vote in parliament.

tl;dr
– plebiscite reintroduced to Senate this week
– could be compulsory attendance or non compulsory postal
– any result is non binding

‘We resolved to maintain to give all Australian a say on whether or not the definition of marriage should be changed,’ he said.

‘Our preference is to give effect to the commitment we made at the last election… that is why we’re asking the senate to support the compulsory attendance plebiscite.’

Cormann confirmed the plebiscite enabling legislation will be introduced again to the Senate this week. If it is rejected for a second time the Liberal Party would move ahead with a postal vote.

BREAKING: the Liberal Party Room has voted overwhelmingly that this is the hill they’re going to die on.

ABC News 24 reported response for postal votes was at about 13-15% and susceptible to voter fraud.

It is not clear whether the ‘rebel MPs’ will cross the floor against their party if a Private Members’ Bill was introduced to parliament.

The details of the Liberal Party’s plan will be hashed out in a joint party meeting room on Tuesday.

‘Today the government broke the hearts of gay and lesbian people in Australia,’ The Equality Campaign’s co-chair Anna Brown told media after the meeting.

‘We’re ready with a legal action if the government goes ahead with a postal vote.’

The Equality Campaign’s executive director, Tiernan Brady, said people should not lose sight that this was a debate about real Australians.