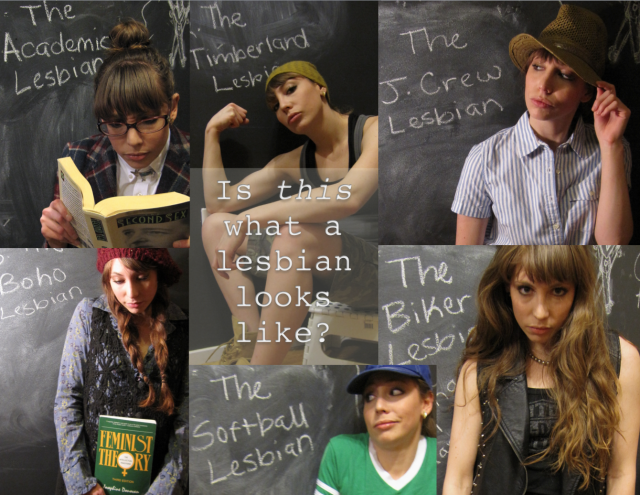 Probably, the most common stereotype about lesbians is: sad, bitter women, who failed to meet good men, thus they became angry, fat, man-hating feminists without sense of humor. What lesbian girls do in bed is one of the most wide spread questions nowadays, so let’s take a look at some of the stereotypes about ladies-loving-ladies.

This stereotype says that lesbian couples move in together after they’ve been dated for 3 weeks. That long? Moving on…

It’s widely believed that lesbian girls have an urge to merge. It means you spend all your time together and become the same person – ordering the same food, brushing your teeth together, etc. These couples even look alike in no time; match their clothes, have similar hair-cuts…Well, it can actually happen but isn’t a rule for sure.

It’s believed once two girls start dating, they no longer go out and have a party, but stay at home and are all coupley, which is the reason why the gay scene is frequently heavily dominated by men. Lesbians only go out until they meet their lady, then they stay home and cuddle. Okay, it can be Saturday night and lesbian women can sit together on a couch wrapped up in a blanket. Moving on…

This can be true, but not necessarily. In fact, lots of the stereotypes about lesbians are centered around guys. It’s ridiculous, when you’re talking about girls liking girls, you would expect to leave men out of the equation. All the myths that revolve around guys are easily busted.

Lesbian girls hate men! We really don’t understand why not wanting to have sex with somebody would make us hate them. If you’re not sexually attracted to llamas, it doesn’t mean you hate them, right?

If you prefer girls, it doesn’t mean you want to be a guy. Being transgender is a different thing.

It can be true. A lesbian woman can have a few men in her life without meeting the right one, because he doesn’t exist. So that she meets the right woman: problem solved.

Both of them are women, that’s kind of the point.

It’s the all-time favorite – lesbians are just dying to have a man in their bed, or at least, watch them have sex, if only somebody would offer! It’s not true, lesbian girls don’t want to have a man. No, they don’t need ‘the meat in the sandwich.’ Maybe this is where the ‘man-hating’ idea comes from. It’s fair to say that lesbians don’t usually like either penises or people who behave like that.

It’s a case when a lesbian girl challenging stereotypes can’t escape all of them. She can be a tree-hugging, cat-loving or U-hauling. But she doesn’t represent the whole lesbian population. No one wants to be a walking stereotype, though sometimes myths of any kind can contain a grain of truth. What about busting the myths by ignoring the stereotypes about how lesbians supposed to look, think and act, and just being themselves?