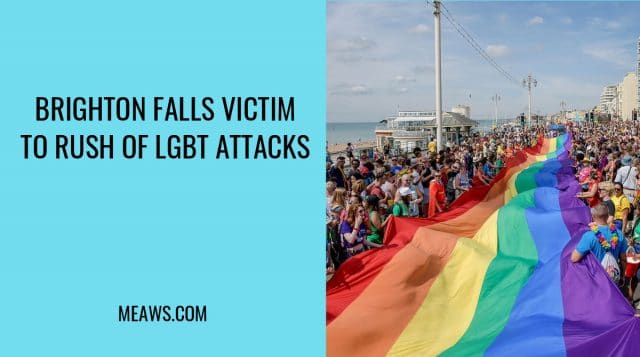 An LGBT+ charity has reported a spate of assaults on Brighton’s queer community.

Brighton is widely regarded as one of England’s most liberal, LGBT-friendly towns.

But in recent weeks as many as seven LGBT people have fallen victim to assault, according to Alan Flack, founder of the Rainbow Hub charity.

“To this day we’re not sure if they specifically targeted gay people or if it was just about robbery,” Flack told local newspaper The Argus.

“It really took us by surprise. I’ve never seen attacks like that in such a short space of time.

“We all think of Brighton as being open and having pride but there’s actually an underbelly to the city.”

The reported attacks took place around the popular St James’ Street. Flack claimed that one man had been admitted to intensive care as a result of a violent robbery.

He added that Brighton’s transgender population is “struggling with acceptance and recognition” from a community “20 years behind” on LGBT rights.

“It hits them harder because we’re still on the fringe of society,” he told The Argus.

“Humans are generally scared of things they don’t understand.

“A lot of people don’t understand the trans experience, they see a man in a dress and they think it’s funny, when really it’s self-expression.”

Brighton is home to the UK’s largest Pride festival, which this year will be headlined by Kylie Minogue.

Last year’s bill was topped by Britney Spears, who performed to 57,000 in front of a rainbow flag.

A rainbow Union Jack is flown on the beach during Brighton Pride. (Tristan Fewings/Getty)

Sadly the event was marred by isolated incidents of hate speech.

Journalist Benjamin Butterworth was verbally abused by a man who threatened to stab him for being gay.

“Then he said he was going to pull a blade out and stab every gay person on the train.”

In a separate incident,people travelling to Brighton Pride were subjected to homophobic and racist abuse by Ryan Brown, who was later sentenced to four years and six months in jail.