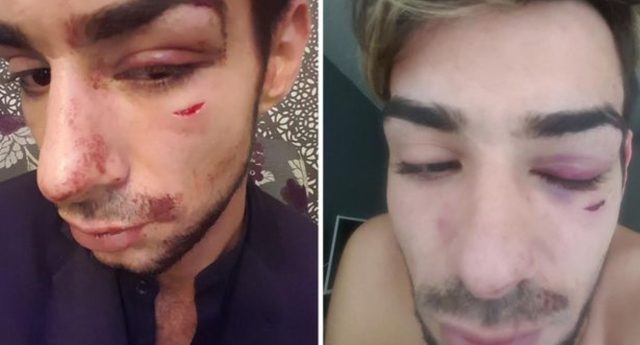 A socialite dubbed Britain’s vainest man was attacked inside a gay nightclub in Manchester.

Ryan Staveley was assaulted in Kiki, on Canal Street, whilst out with friends in the early hours of Saturday morning. The 25 year old has been told he will need stitches after he was left with a bloody, swollen face and a potentially broken eye socket.

Staveley has hit out at the police for allowing his attacker to walk away with a caution.

“It’s disgraceful. The guy walked over to me and belted me for no reason, knocking me to the floor.”

“It was completely unprovoked and I didn’t retaliate at all.”

“I had two friends with me from the Lake District – it was their first time in Manchester and I wanted to show them a good time. Instead they ended up covered in blood. Other people on the dance floor ended up with blood all over them too.”

The fashion and cosmetics manager has a desire to become the perfect 10 – a desire which has led him close to bankruptcy. He claims to have £22,000 in debt on store card alone that he has built up from spending an average of £1,000 a month on clothes and cosmetics.

The costly lifestyle is further supported by his modelling work. Staveley also volunteers with the Dementia Friends charity.

Staveley says he was struck in the face by the man three times.

“I’ve been told I’ll need stitches, and it’s possible I have a broken eye socket.

“It’s not acceptable – I can’t open my eyes properly, I can’t work, and all he gets is a caution.

“People in the club were horrified after having to watch what happened.”

Greater Manchester Police confirmed they were called to the club at 2.53am on Saturday morning.

Inspector Phil Spurgeon, of GMP City Centre, said: “A caution is not a ‘soft option’. The individual gets a ‘police record’ which impacts on them in all sorts of ways, including employment, education, travel.

“I understand that incidents like these affect people in different ways and victim support services are available.”