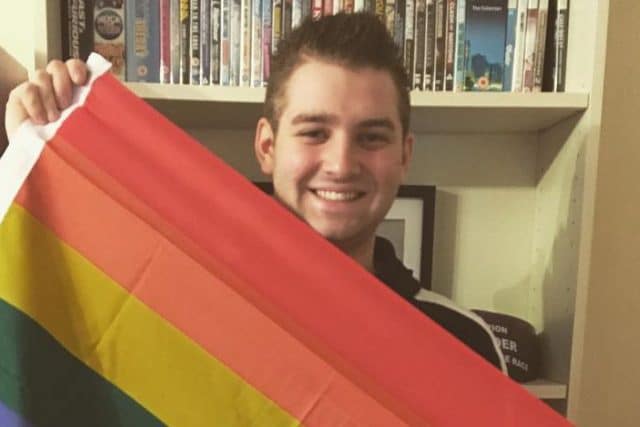 Leader is a gravity bike racer, someone who rides pedal-less bikes down hills, from Lincolnshire, and he’s very good at the sport. While continuing on as a student at the University of Lincoln, Leader has won the British Evolution Cup Championships in both 2016 and 2017.

But, his latest accomplishment to date is coming out as gay.

So 2018 is finally here and for about 6 months now, this is how I wanted to start the new year. A fresh start. No more hiding, no more lies, no more fannying around! To some of you this won’t be news or anything new but to a lot of you, I imagine it won’t have even crossed your mind. Some of you may have thought about it I imagine ? What I’m trying to do is come out and say I’m gay ?️‍? I’ve spent a lot more time in paddocks in recent seasons but this issue has never come up, I’ve never known if the paddocks would accept a gay rider. I guess I’ll find out soon! ? I’ve always worried that people would look at me differently and so wouldn’t accept me into paddocks. I’ve always worried this would hinder me from getting sponsors and maybe even signed by teams in the future; that team managers wouldn’t want the hassle and so wouldn’t bother, regardless of how good I may be. Obviously I’ll find all this out in good time but I really hope everyone both in general life and racing life accepts me for who I am. This is a purely personal decision to come out but maybe if there are other LGBT racers in British paddocks then it may help them to find themselves and consider coming out too, or find the confidence to talk about it. I’m always happy to talk to anybody about it ? Maybe one day we may see more racers happy and confident to come out as a member of the LGBT community! ? I’m telling you all now though, I’m a man on a mission. I’m going to be the first openly gay BGBC champion and then one day I’m going to Britain’s one of Britain’s first openly gay national motorcycle champions and the ultimate goal is to be THE FIRST EVER OPENLY GAY BRITISH SUPERBIKE CHAMPION. And mark my words, I’ll get there if it’s the last thing I do! I’m going to be an ambassador in racing for the LGBT community too which I’m going to be incredibly proud to do ? Feel free to message about anything guys but I hope you all accept me and continue to show me the love! ❤️ I don’t currently have that special guy in my life to share everything with and to share my journey to glory with at the moment but I’m working on it ? Happy new year everyone! #gay #gayteen #lgbt #gayracer #comingout

In the letter he says that he wanted to start out 2018 right with no more lies.

“I haven’t come out properly until now because of a mixture of things. I’ve been a bit nervous to come out because of the general reaction to it and not knowing if people would accept it or not. A lot of it has been because I’ve not been ready to whereas now I know I am.”

“However, the main reason I haven’t come out until now is because of racing.”

Leader goes on to say that he’s known two things since he was very little, that he wanted to be a motorcycle racer and that he was gay.

“In all the time I’ve grown up in motorcycle racing, I’ve never seen a openly gay racer, and I’ve always wondered if there was a reason for that.”

“I’ve always thought there may be a few reasons. One being that motorcycle racing, or racing in general, is perceived to be a very macho and masculine sport and so a gay rider may not be as openly accepted as we like.”

2017 British Gravity Bike Evolution Cup Champion and 2017 British Gravity Bike Runner Up ?? 3rd at Harewood too! Should've been 2nd but a judicial decision pushed me down a place, don't agree with it at all but it is what it is. Still had a mega 2017 season, thank you to everyone who made it possible and put in 110%!! @gridline_racing @racingellison @spadaclothinguk @xpresscoffee @goodridgeltd @savage_squirrel1 @westsliders @macauley_bowers @nickleadley @pvrk3r @gravitybikehq #gravity #bike #gbike #gbiker #bmx #biker #race #racing #racer #gravityracing #gravityracer #downhill #77 #teamellison #BGBC2017 #harewood #life #happy #achievement #champion #awesome #mega #photography

The athlete went further to say, “Maybe one day we may see more racers happy and confident to come out as a member of the LGBT community!”

“If anyone isn’t too comfortable with me coming out then please don’t hesitate to message me and talk to me about it, I’m no different in any way! I’m still the same crazy, smiling nutter you all know.”

Thankfully, Leader hasn’t had to deal with much negative backlash. Instead, Leader has later said that the reaction to his coming out has been “brilliant” with warm welcoming from fans/family and plenty of media coverage as well.

We at Instinct wish to congratulate Zack Leader and want to say that we look forward to watching his career grow from here.