Home Gay Life Broadway Dancer Murders Boyfriend, Confesses On Facebook: “I Am God. I Give... 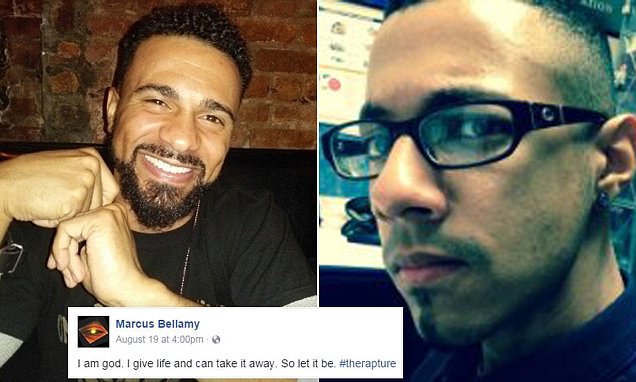 After writing a series of increasingly chilling Facebook posts, a Broadway dancer named Marcus Bellamy (pictured) has been charged with the murder of boyfriend Bernardo Almonte.

The 32-year-old performer, who appeared in the beleaguered production Spiderman: Turn off the Dark, confessed to beating and strangling Almonte to death, saying he “did it for love.”

“Forgive me,” the post reads. “I did it because I love you. I love you all. I loved him also. He told me love and hate are the same emotion.”

After the murder, Bellamy posted a confession and several shirtless photos to Facebook, left the Manhattan apartment he shared with Almonte,  and then told his neighbor what he’d done.

The neighbor called the police, and Bellamy was arrested at the scene.

According to an eyewitness, Bellamy stood outside the apartment waiting for police to arrive, staring at the sky with his hands raised in the air.

Police discovered Almonte’s corpse splayed on the ground face down, bleeding from a wound to the head.

According to The New York Daily News, police claimed Bellamy bit both of Almonte’s shoulders during the fight.