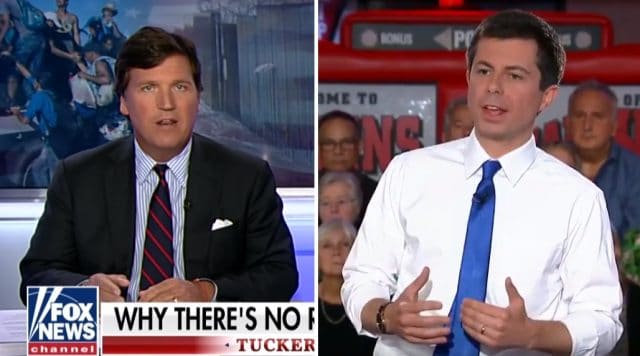 Buttigieg also defended his decision to take part in the town hall by warning Democrats that many voters may not hear the party’s message if candidates do not speak out in such venues.

“There are a lot of Americans who my party can’t blame if they are ignoring our message because they will never hear it if we don’t go on and talk about it,” Buttigieg told town hall moderator Chris Wallace.

“That’s why whether it’s going into the viewership of Fox News or geographically it’s going into places where Democrats haven’t been seen much, I think we got to find people where they are, not change our values, but update our vocabulary so we’re truly connecting with Americans from coast to coast,” he continued.

“I get where that’s coming from, especially when you see what’s going with some of the opinion hosts on this network,” he said, referring to some Democrats who disagreed with him for appearing on Fox News.

“When you get Tucker Carlson saying that immigrants make America dirty, when you got Laura Ingraham comparing detention centers with children in cages to summer camps.”

“Summer camps?” he added for emphasis. “There is a reason why anybody has to swallow hard and think twice before participating in this media ecosystem.”

He then noted while some of the network’s opinion hosts are not there in “good faith,” he feels a lot of Fox News viewers are tuning in “in good faith.”

“I think we have to find people where they are,” and update our vocabulary to “connect with Americans from coast-to-coast,” he added.

“I don’t care,” Buttigieg said, describing Trump’s online behavior as “grotesque.” He added that “it is the nature of grotesque things that you can’t look away.”

His comments came after Trump took aim at Fox News for giving Buttigieg airtime and compared him to a character from Mad Magazine.

“Hard to believe that @FoxNews is wasting airtime on Mayor Pete, as Chris Wallace likes to call him,” Trump tweeted.

….who got them there. Chris Wallace said, “I actually think, whether you like his opinions or not, that Mayor Pete has a lot of substance…fascinating biography.” Gee, he never speaks well of me – I like Mike Wallace better…and Alfred E. Newman will never be President!

Wallace appeared surprised when the town hall audience gave Buttigieg a standing ovation after he delivered his closing statement.