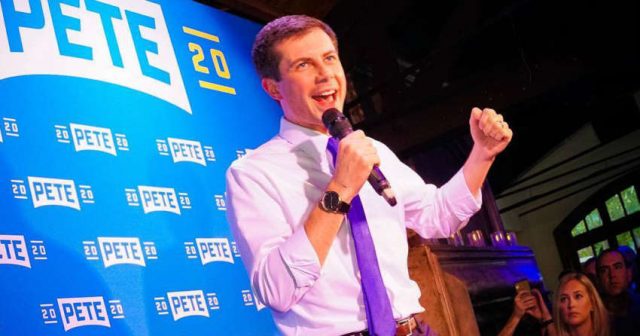 Gay presidential hopeful Pete Buttigieg on Sunday (2 June) got choked up when a second-grader asked him what he would do to make schools safer.

‘It’s not normal, it’s not ok, and we owe it to you, we owe it to anybody who’s in school, and for that matter their teachers, who we love and want to be safe, to make sure that safety is there,’ Buttigieg said, presumably referring to regular mass shootings in American schools.

‘It means we’ve got to change what kinds of weapons people can get’.

Buttigieg said his military service taught him a lot about some of the weapons used in attacks on schools.

‘One thing I know about them is that they don’t belong anywhere near an American school,’ he said.

The South Bend Mayor plans to ban military-style assault weapons, implement universal background checks, and create a nationwide system for gun licensing if he is elected.

He has also promised to amend the ‘boyfriend loophole’ which allows people convicted of domestic violence against a dating partner to still legally purchase a gun.

‘One of the voices that’s in my head when someone like you asks a question like that. We cannot let you down,’ Buttigieg told the child on Sunday, becoming emotional.

‘Those of us in elected office owe it to you, to do whatever it takes, even if it means losing an election every now and then to keep you safe.’

Buttigieg announced that he would be running for president in January, and officially began his campaign in March.

Since then he has experienced a surge in popularly and has begun to regularly feature in the media.

Last month, he and his husband were on the cover of magazine.

Fellow presidential hopeful Massachusetts Senator Warren has also been rising in the polls in recent weeks. A recent survey placed Warren ahead of Buttigieg.

A recent survey also found that . However, 53% also said that they did not think the US was currently ready for a gay president.