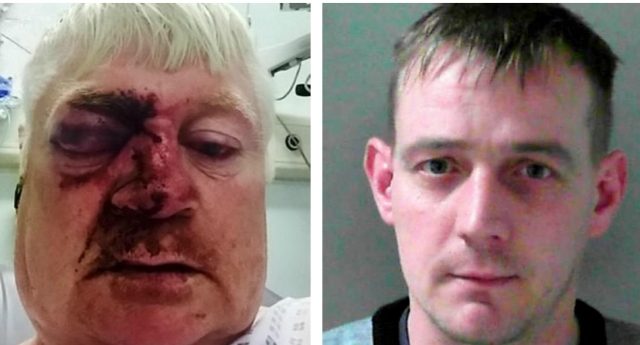 A cage fighter has been exposed as the man behind a horrific homophobic attack last New Year’s Eve.

Now the police have released the mug shot of his attacker. Keith Moult, a 35-year-old cage fighter and boxer, beat the man up in an attack so brutal it left Mr Ryan just 15 minutes from death according to doctors.

Moult has now been found guilty of assault and sentenced to 18 months behind bars.

The attack happened in the village of Henstridge, Somerset, where Mr Ryan had moved to start a new life.

He continued the brutal assault as he lay helplessly on the ground and lost consciousness.

Mr Ryan was left in the street in freezing temperatures, with his body temperature dropping to a dangerously low 24 degrees.

His body was eventually found by a passer-by who helped take him to hospital.

The 56-year-old told PinkNews: “Don’t be scared to report this if it happens to you – justice will be done.

“Gay and lesbian people, LGBT people, need to know that this could happen to them and be aware.

“But they shouldn’t be afraid to report it if something happens to them this New Year’s Eve.”

He had originally kept the attack to himself, too afraid of the consequences and that nothing would be done if he reported the crime.

But friends convinced him to speak about the homophobic assault.

Mr Ryan had moved to the rural village from London to settle down, and intended to spend his retirement there.

But police warned him the attack could be repeated.

He has now had to return to London for fear of being attacked a second time.