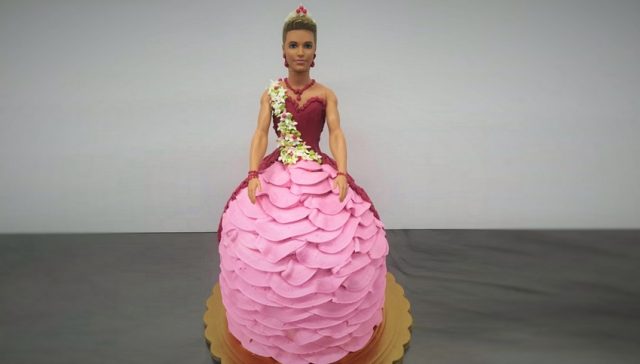 A Sacramento, California bakery is getting a flood of support this week after one of its fabulous custom cake creations recieved a backlash of anti-gay and transpohbic comments on social media.

Marlene Goetzeler, the co-owner of Freeport Bakery, said she was “shocked” by some of the reactions to her Ken doll cake, which featured Ken in a pink princess gown and wearing a tiara, a sash, and some jewelry. Goetzeler told Fox 40 she didn’t think the request was unusual because she makes a lot of “doll cakes,” and said this creation was for a customer’s birthday party.

“Naively, I guess I just thought this is a really cool cake, and look at how great they did with the butter cream,” said Goetzeler. “What’s wrong with a Ken cake?”

“I started getting some negative comments … Then a couple days later I noticed there was a big dip in unlikes. I was kind of surprised,” said Goetzeler.

The bakery’s page lost dozens of Facebook likes and potential business after an LGBT debate erputed on her post.

“I was shocked that somebody would be offended,” said Goetzeler.

“Oh, I thought it was fantastic,” said Chad Graham, who attended the party where the cake was served.

Graham says it was at the birthday party for a member of a group that meets once a month for a dice game. He says the cake’s recipient is not transgender nor was he trying to make a political statement whatsoever. The cake’s recipient didn’t wish to speak to FOX40. The backlash took the group by surprise.

“I thought it was a little ridiculous. It was just cake,” said Graham.

But when word of the confection controversy began to spread, hundreds of people came to the bakery’s defense, both on social media and at the storefront.

“In the beginning, I thought ‘What’s the big deal?’ but now I realize how important it is to take a stand if you believe in something,” said Goetzeler.

A small gesture with a big impact. Goetzeler says this time acceptance takes the cake.

Despite the negative backlash Goetzeler recieved, hundreds of supportive comments flooded the facebook page, including this one from Kimberly Benson: “I have a transgender son… I think this cake is brilliant! Even though this wasnt for someone who is transgender. This is still an awesome cake… Keep making great cakes.. Turn a blind eye to closed minded people. I like it.”

Longtime customer Kevin Schunke writes, “I’ve shopped with you since 1983 when I moved to Sacramento. Not just everyday goodies, but special occasion are made better with your cakes. Thanks for serving all your customers!”