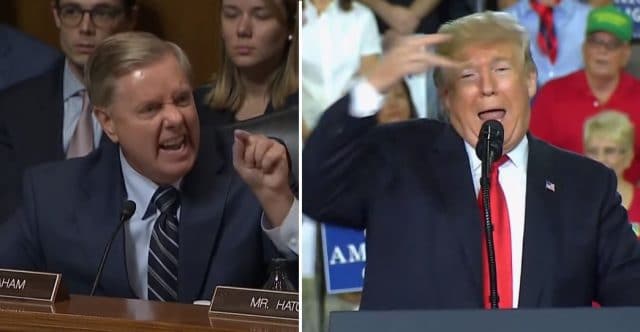 Sen. Lindsey Graham (R-S.C.) on Wednesday’s suggested on Twitter that the first Democratic presidential debate made a third term for President Trump look “better and better.”

“Third term for Trump you have lost your mind [and] now you need to lose your seat,” one user tweeted.

Jaime Harrison, the former chairman of South Carolina’s Democratic Party who is challenging Graham in 2020, ripped into Graham on Thursday, tweeting: “Senator Graham, in SC we have spines. Do us a favor and find yours.”

“When your only concern is covering your political ass — you joke about undermining the US Constitution, sell out your constituents, and abandon your moral compass,” Harrison wrote.

Graham wasn’t the only one who suggested the president seek a third term.

During the second half of the first Democratic presidential debate on Wednesday, President Trump tweeted a doctored video depicting him campaigning for office indefinitely on the cover of Time magazine.

Trump has previously joked about serving more than two terms, including at a campaign rally in May, when he told a crowd that he could potentially serve a fifth term in the White House with their help.

In April he told a crowd that he might remain in the Oval Office “at least for 10 or 14 years.”