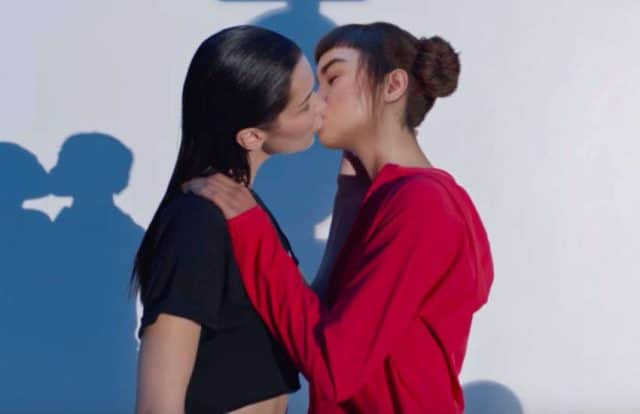 The has surrounded an ad by the clothing retailers which features model Bella Hadid kissing female robot, Lil Miquela.

LGBTI rights supporters have criticized Calvin Klein for featuring Hadid, who the company says ‘identifies as heterosexual’, rather than an openly gay model.

This has led to accusations of ‘queerbaiting’ online. The term describes what are essentially marketing gimmicks superficial portrayals of LGBTI culture or relationships which lack any serious nuance.

The clothing retailer issued a statement saying the ad was intended to ‘challenge conventional norms’. However, Calvin Klein also said they ‘understand and acknowledge’ criticisms of the ad.

Lil Miquela, a digital animation of a 19-year-old woman, has become a popular figure on Instagram since beginning life on the social media platform in 2016. This online popularity has led to the virtual influencer gaining modeling work and releasing music.

Hadid is one of the most in-demand models currently working in the fashion industry. The model has famously been in an on-again/off-again relationship rapper TheWeeknd. However, there has been speculation over Hadid’s sexuality in the past.

In a statement posted on Twitter, Calvin Klein said they ‘welcome all types of constructive feedback from our community’, while offering their response to the criticisms of the ad.

‘The concept for our latest #MYCALVINS campaign is to promote freedom of expression for a wide range of identities, including a spectrum of gender and sexual identities,’ the statement reads.

‘This specific campaign was created to challenge conventional norms and stereotypes in advertising. In this particular video, we explored the blurred lines between reality and imagination.’

‘We understand and acknowledge how featuring someone who identifies as heterosexual in a same-sex kiss could be perceived as queerbaiting,’ the statement continues.

‘As a company with a longstanding tradition of advocating for LGBTQ+ rights, it was certainly not our intention to misrepresent the LGBTQ+ community. We sincerely regret any offense we caused.’

A number of people had been critical of the clothing company on social media following the release of the ad.

Twitter user @hemsflower wrote: ‘a corporate brand will show lil miquela and bella hadid making out but not an actual gay couple’.

Another Twitter user, @OttavioGM, wrote: ‘”Life is about” what? This is a total queer bait …’

The ad featuring Hadid and Lil Miquela is part of Calvin Klein’s new marketing campaign I Speak My Truth In #MyCalvins.

The campaign has already gained attention from many fans of queer pop culture, featuring several LGBTI models and actors.