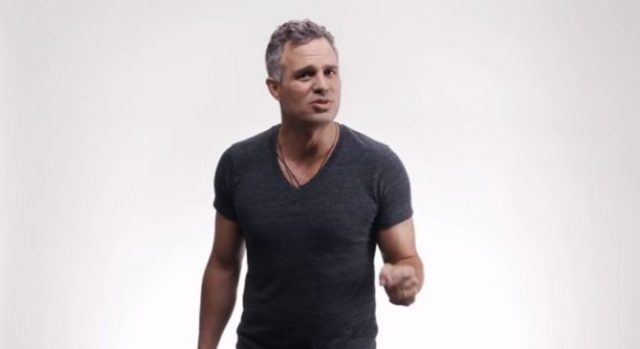 Director Joss Whedon has assembled a “shit ton” of celebrities in a new video asking you to vote, with the promise of a Mark Ruffalo nude scene if you do.

Whedon returned to Twitter to announce the spot, which he filmed as part of his new Super PAC Save the Day‘s initiative to get progressive voters out to the polls on Tuesday, Nov. 8.

Robert Downey, Jr., Neil Patrick Harris, James Franco, Julianne Moore, Rosie Perez, Keegan-Michael Key, Don Cheadle and a host of others, including a couple regular people for the “unpolished sincerity” factor, do their best to convince the American public to cast their ballot for Hillary Clinton and other Democratic candidates.

They argue against the talking points often heard by those considering a protest vote, or those considering staying home, saying it is inaccurate to claim that both sides are equally bad, or that one vote doesn’t matter.

The Save the Day website explains: “We are a short-form production company dedicated to the idea that voting is a necessary and heroic act. That every voice in this wonderfully diverse nation should, and must, be heard. That the only thing that can save democracy is the act that defines it. We are committed to fighting the apathy, cynicism, and honest confusion that keeps citizens from using their vote. And to reminding an increasingly out-of-touch and compromised set of representatives that they are answerable to the people they were hired to serve.”

Whedon returned to Twitter in order to promote the video.

“Hey! Did I miss anything? Lol jk the world is on fire here’s a thing I made savetheday.vote” he tweeted. He followed that up with another tweet, reading, “Proof it’s really me: I already failed on my 1st tweet because tech – the link to the vid I made is THIS” with a link to the PSA on YouTube, which you can find below.

Hey! Did I miss anything? Lol jk the world is on fire ? here's a thing I made https://t.co/g1SE45Rkrv

Check out some behind the scenes photos from the shoot.

Behind the scenes of "Important" with @markruffalo and #josswhedon for savetheday.vote