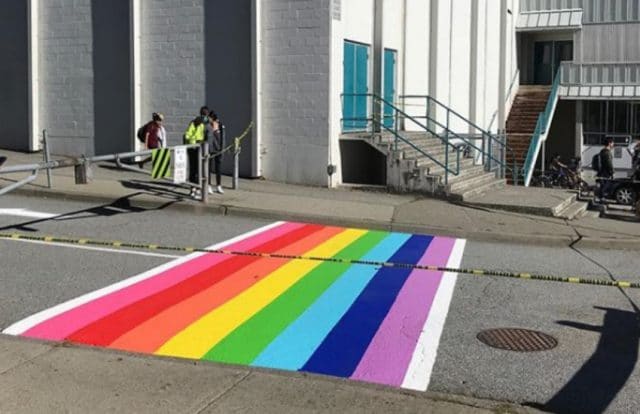 A Canadian city has postponed painting a rainbow crossing in the town until the results of a national review into them is released.

Moncton a city in New Brunswick on the Canadian eastern seaboard did paint temporary rainbow crossings in 2017.

But city spokeswoman Isabelle LeBlanc said officials were waiting for the Transportation Association of Canada to release a study looking into them before deciding whether to install them this year.

The New Brunswick’s transportation department informed municipalities in 2018 that it did not approve of rainbow crosswalks, according to

‘There aren’t any other municipalities in our experience that have regressed on their practice of painting rainbow crosswalks,’ he said.

The debate over rainbow crossings has spread across the country. Springdale in Newfoundland did not allow one to be painted near a high school. But it did allow a Pride Week.

Other rainbow crossings in the country had been vandalized just hours after being painted.

, Saskatchewan painted a crossing to honor Pride month but vandals graffitied over it. Later that year it only took a few hours for vandals to paint over a crossing in Alberta. Police investigated it as a hate crime.