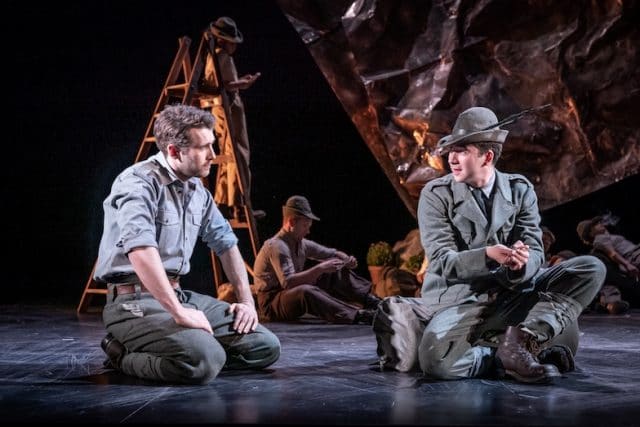 Set on the idyllic Greek island of Cephalonia in the early 1940s, this show tells the story of the titular Captain Corelli, an enigmatic young Italian officer posted to the island as part of the occupying forces during the war. He is housed with local man Dr Iannis, and swiftly falls for the doctor’s feisty and beautiful daughter Pelagia. It’s a charming and intriguing adaptation of the multi-million selling novel, although at times it is somewhat meandering.

This is particularly notable in the first act, which spends an awfully long time establishing characters and setting. It feels somewhat imbalanced, with an overwhelming amount of action taking place during the latter part of act two and not nearly enough happening before then. However, it’s worth persevering beyond the interval, as there is plenty in the second act to appreciate.

A handful of visual effects impressed – one scene where the soldiers appeared to be freezing to death in the cold conditions was particularly striking, while the projections added colour and variety throughout. In terms of the principal actors we warmed to Madison Clare’s intelligent and mysterious Pelagia, while the ensemble cast showcased some really great physicality in their acting, most evidently in those tasked with taking on the roles of animals. We absolutely adored Luisa Guirreiro’s brilliant bleating goat, while Elizabeth Mary Williams’ pine marten was endearing, especially when responding to music.

Some elements weren’t quite as strong, however. We were extremely disappointed with the handling of one of the novel’s subplots, that of the secret love affair between two Italian soldiers. This was dealt with very briefly and clumsily; and while we’re all for seeing more LGBTQ+ love stories represented on the West End stage, this element really felt like it was tacked on as an after thought.

It’s a shame that there are a handful of missteps and that it’s rather too long, because at its heart Captain Corelli’s Mandolin tells a great story with some strong acting and production elements. A bit of editing and refinement could see this becoming an absolute must-see, but in its current form it’s merely a reasonably intriguing adaptation.