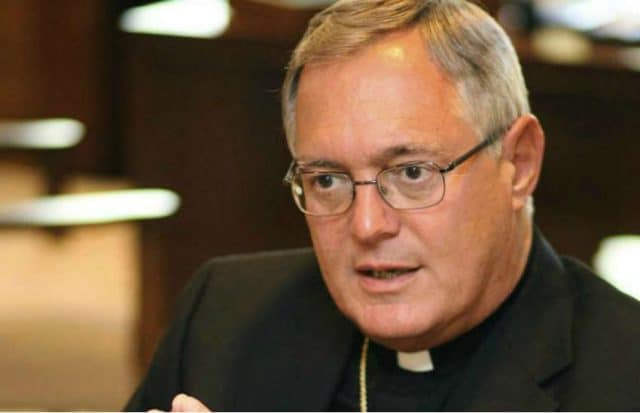 A Catholic bishop has been met with widespread condemnation online after warning people against supporting Pride Month.

Bishop Thomas J Tobin, the bishop for Providence, Rhode Island, made the warning in a tweet on Saturday (1 June).

Tobin wrote: ‘A reminder that Catholics should not support or attend LGBTQ ‘Pride Month’ events held in June. They promote a culture and encourage activities that are contrary to Catholic faith and morals. They are especially harmful for children.’

This year holds particular significance for Pride Month, which will see the 50-year anniversary of the Stonewall Riots. The riots were a fundamental milestone for the modern LGBTI rights movement.

Tobin’s tweet has been met with widespread condemnation on social media. At the time of writing, his tweet has over 36,000 replies, the overwhelming majority which are highly critical of his comments.

A number of Twitter users drew attention to instances of sexual abuse committed by Catholic priests which had been covered up by the Church.

This is notably true in Pennsylvania, where the Catholic Church covered up decades of sexual abuse committed by more than 300 priests, according to a grand jury report.

Tobin served as auxiliary bishop of Pittsburgh between 1992 to 1996, one of the six Pennsylvania dioceses included in the grand jury report.

The bishop later said that he ‘became aware of incidents of sexual abuse when they were reported to the diocese’, but claimed they were outside of his responsibilities.

Other Twitter users called out the bishop for going against the Christian teachings of love and acceptance.

Tobin, whose Twitter account refers to him as ‘proudly pro-life’, has made anti-LGBTI statements in the past.

In 2013, Tobin has described same-sex marriage as ‘immoral and unnecessary’.

‘Jesus never said a word about homosexuality, about Pride, or the Queer community,’ Joe Lazzerini, president of Rhode Island Pride, .

‘Rhode Island Pride respectfully calls on Bishop Tobin to do some self-reflection as the majority of Catholic Rhode Islanders in this state reject the idea that to be Catholic is to be complicit to intolerance, bigotry, and fear.

‘Many Catholics are LGBTQIA+ and allies to our community, who participate in the love and diversity that is Rhode Island Pride.’ Lazzerini added. ‘All are welcome to enjoy a safe, fun, and prideful celebration on Saturday, June 15th.’

Lazzerini also said that Rhode Island Pride will hold a rally at Cathedral Square in Providence on Sunday evening (2 June).

‘Since Bishop Tobin called on Catholics to abandon Pride & the LGBTQIA+ community, we are taking Pride directly to them,’ he added.