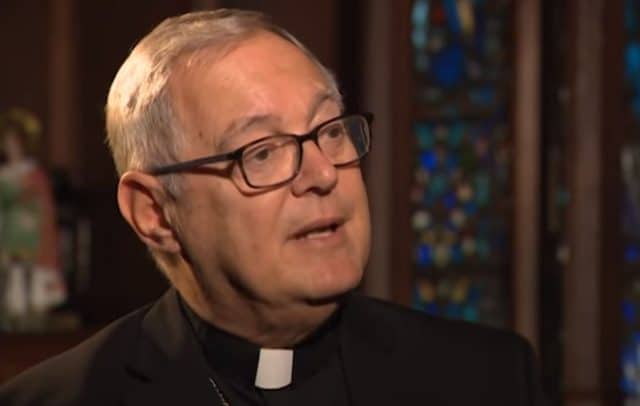 A Roman Catholic bishop who admitted last year to being “aware of incidents of sexual abuse” in the church but did nothing to stop them, deemed LGBTQ Pride Month “harmful for children.”

Bishop Thomas Tobin of the Roman Catholic Diocese in Providence, R.I., urged Catholics on Saturday to not support or attend events held for Pride Month.

“A reminder that Catholics should not support or attend LGBTQ ‘Pride Month’ events held in June,” Tobin tweeted.

“They promote a culture and encourage activities that are contrary to Catholic faith and morals,” the 71-year-old added. “They are especially harmful for children.”

In 2018, Tobin acknowledged that he “became aware of incidents of sexual abuse when they were reported to the diocese” between 1992 and 1996 in Pittsburgh when he was the auxiliary bishop of that city, reports The Providence Journal.

He said, however, that reporting the allegations was not a part of “my responsibilities as Vicar General and General Secretary of the diocese.”

“My responsibilities as Vicar General and General Secretary of the diocese did not include clergy assignments or clergy misconduct, but rather other administrative duties such as budgets, property, diocesan staff, working with consultative groups, etc. Even as an auxiliary bishop, I was not primarily responsible for clergy issues,” he said in an email statement to the Journal.

A grand jury investigation in Pennsylvania found more than 1,000 identifiable victims of sexual abuse by priests.

“Kids are in far more danger at a catholic church than at a gay pride gathering,” Farrow wrote.

Joe Lazzerini, president of Rhode Island Pride, called on Tobin to “do some self-reflection.”

“Jesus never said a word about homosexuality, about Pride, or the Queer community,” he said in a statement to the Journal.

Tobin released a statement Sunday in response to the backlash.

“I regret that my comments yesterday about Pride Month have turned out to be so controversial in our community, and offensive to some, especially the gay community. That certainly was not my intention, but I understand why a good number of individuals have taken offense. I also acknowledge and appreciate the widespread support I have received on this matter,” Tobin said. “The Catholic Church has respect and love for members of the gay community, as do I. Individuals with same-sex attraction are beloved children of God and our brothers and sisters. ”

He added that he hoped those attending a rally in Providence later would have a “safe, positive and productive experience.”

“As they gather I will be praying for a rebirth of mutual understanding and respect in our very diverse community,” he concluded.