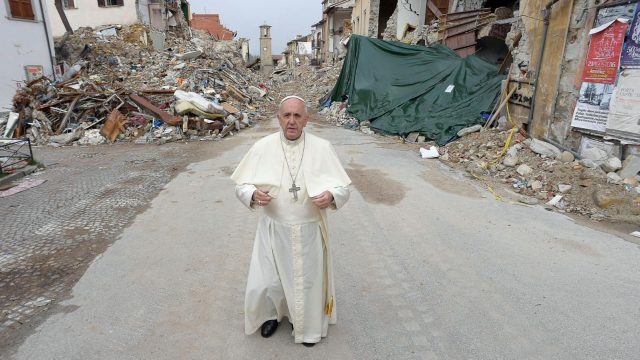 The Vatican quickly distanced themselves from the comments, saying they were Pagan and not Catholic.

A Catholic friar has come under fire for comments about the fatal August earthquake in central Italy. ‘From a theological point of view, these disasters are the result of original sin,’ he said.

‘We are in the presence of a divine punishment. The earthquake was a punishment for the sins of man […] and two men together represent a sin against nature.’

Cavalcoli was asked whether the government passing a bill legalizing civil unions for same-sex couples in June was responsible for the earthquake.

‘Yes, it can happen that way,’ he responded.

The Vatican has distanced itself from the idea the tragedy was God’s punishment for same-sex partnerships. Its home affairs minister Angelo Becciu said the ideas were not Catholic but ‘Pagan’, or ‘pre-Christian’.

‘Comments like this are offensive for believers, and scandalous for non-believers,’ he said.

‘Christ has revealed to us a God of love, not a capricious vindictive face.

‘That is a pagan vision, not a Christian vision. May the earthquake victims forgive us.’

Becciu went on to criticize Radio Maria, saying it needed to ‘correct its tone’ with relation to Catholic doctrine.